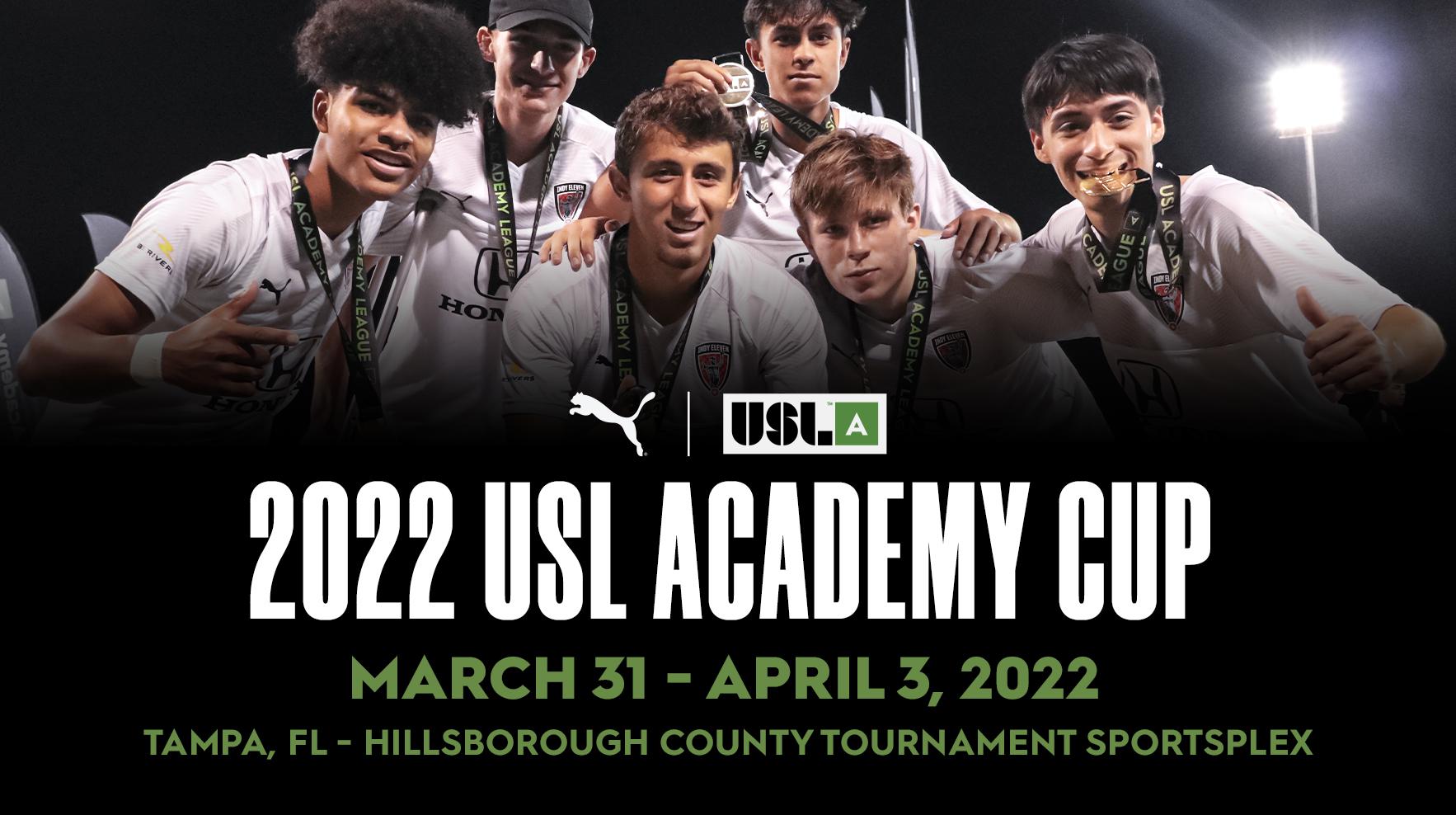 TAMPA, Fla. - United Soccer League (USL) has announced that the 2nd Annual USL Academy Cup, presented by PUMA, will take place from March 31 through April 3, 2022, at the Hillsborough County SportsPlex in Tampa, Fla.

Top youth talents from four age groups, U13 Boys, U15 Boys, U19 Boys and U19 Girls, will compete for the coveted USL Academy Cup while being scouted by some of the top programs in the professional and collegiate game. Each age group will be divided into tiered competitive divisions, where the top teams will compete in groups of four. The first three days will consist of the group stage where each team will play the other three teams from their group. The finals, and consolation games, will take place on April 3.

“We are thrilled to bring the USL Academy Cup back to Tampa for another year,” said USL Technical Director Liam O’Connell. “On one hand, we couldn’t be more excited to align the League & Cup team formation models to better showcase some of the top youth talent making the jump to the Senior Team Level. Beyond that though, we look forward to helping countless USL clubs leverage the platform & this tournament as a way to build and strengthen their local player development pathways.”

After a successful 2021 USL Academy Cup with 76 different teams across three age groups (U13B, U17B and U17G), USL looks to grow the competition in 2022, bringing in more full-time USL Academy League teams from across the nation. The adjustment of the age groups comes to better match the league model to provide a better connection to the senior teams while increasing the likelihood of more active professionals and USL Academy contract signings being involved in the competition as a way to prepare for that jump to the Senior Team level.

“By the increasing the number of age groups, we expect there to be an influx of teams compared to the inaugural event,” said USL Academy Operations Manager Ryan Spurr. “Aligning the U19 Cup Division with the Academy League model will give full-time League members the opportunity to participate and compete against other clubs they might not get a chance to play against in the regular season.”

Previously, the USL Academy Cup’s oldest age group was the U17s. It was great for the inaugural event so clubs could give more opportunities for development to the younger players on the Academy League squad. By shifting the Cup to having a U19 age group, a team can now bring the full League roster.

In a similar mindset, moving the girl’s division to U19 will allow for more opportunities for competitive play and stronger development. With the newly established developmental pathway for girls through the W League, USL is providing a platform to bridge the gap between youth play and the pre-professional platform for top female players looking to prepare themselves for the evolving Women’s Senior Team landscape.

The addition of the U15 Boys age group will provide more opportunities between the other two age groups. With clubs able to have U15 fill roster spots within the USL Academy League system, including the top in this competition, will allow the coaches to pick out some of the best in the age group to have a shot with the top squad.

The USL Academy Cup will not only provide development on the pitch but also off the pitch in the forms of panels and experiences. Though the specific supplemental experience information will be released at a later time, attendees can expect a technical development workshop, a player village and a senior team game day.

More information on the 2022 USL Academy Cup will be released as it gets closer to kickoff. To stay up to date with everything Cup and USL Academy related, go to usl-academy.com or follow @USL_Academy on Twitter.