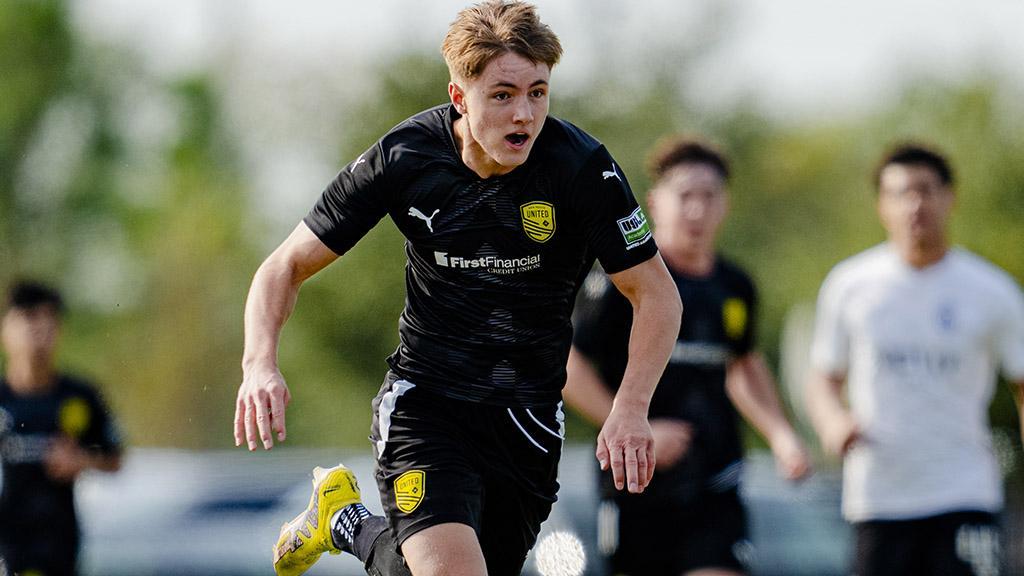 A native of the small town of Taos, New Mexico, Alex Waggoner is set to compete as a USL Academy signing for New Mexico United this year after a remarkable 2022 brought him fully into the spotlight. | Photo courtesy David Young / New Mexico United

Taos, New Mexico, is a town of approximately 6,500 people.

But if Taos native and New Mexico United Academy star Alex Waggoner has his way, it’ll become known for much more: soccer and the notion that top-class American talent can come from anywhere.

“My mom showed me a video of Pelé when I was young,” Waggoner said recently. “I would watch that video every night, and then try to do what he did, and it just grew from there.”

Starting in indoor soccer and then going to rec league, Waggoner’s talent emerged. Then, in a moment of providence, New Mexico United arrived on the scene.

“In the first season I went to game,” he said. “It was really cool to be able to see New Mexico having a professional level. With soccer being my sport, I was like, ‘Well, this is this is great, I love this.’”

As the club built out first its High Performance Program, establishing a first step for youth players, and then its fully-fledged – and fully-funded – Academy program, and there was now a pathway for Waggoner to take aim at something bigger.

There were some initial challenges. When United’s Head Academy Scout Lucien Starzynski called to ask about the possibility of Waggoner becoming part of the program, the three-hour commute each way from Taos wasn’t realistic. 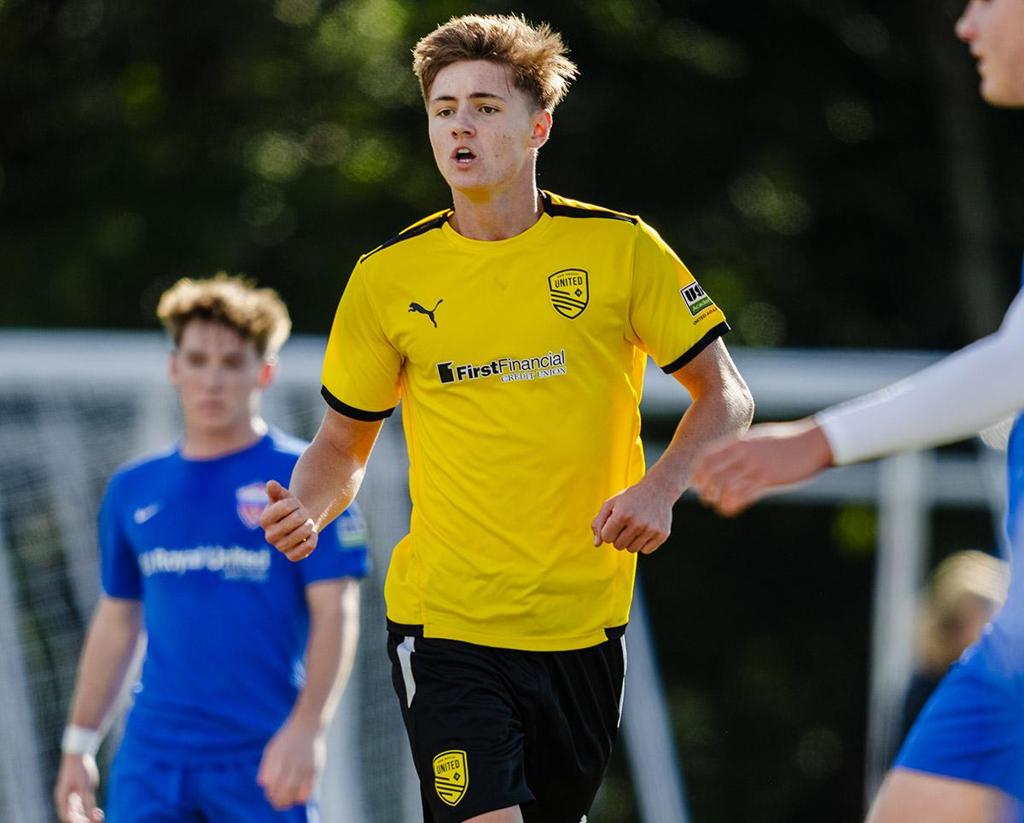 But when Waggoner made the move to Santa Fe with his family after his sophomore year of high school in 2021 – cutting the driving time in half – then the potential for his integration into United’s Academy program became a reality. After a High School season in which he recorded 73 goals and 16 assists in 23 games – leading Santa Fe High to a state title and earning the Gatorade New Mexico Boys Soccer Player of the Year – he was slated to compete for United’s Academy for the first time this past June.

A foot injury delayed that debut, but it hardly slowed down the 6-foot-2 forward. Notching two goals and one assist in his first USL Academy League game for the side against San Diego Loyal SC in September, his upward trajectory continued.

It’s about as close to the vision for New Mexico United and its impact club Owner and President Peter Trevisani had when the club was launched.

“New Mexico United is about bringing an entire state together,” said Trevisani. “It’s not just about bringing Albuquerque together, or Las Cruces, or Santa Fe, it’s the entire state. When it comes to soccer, in our players, we have talented kids that are all over the state. While it takes a lot of work, more work to reach some of them because they’re three or four hours from us, Alex Waggoner is entirely worth it because our academy really is there to highlight our next generation of soccer players.” 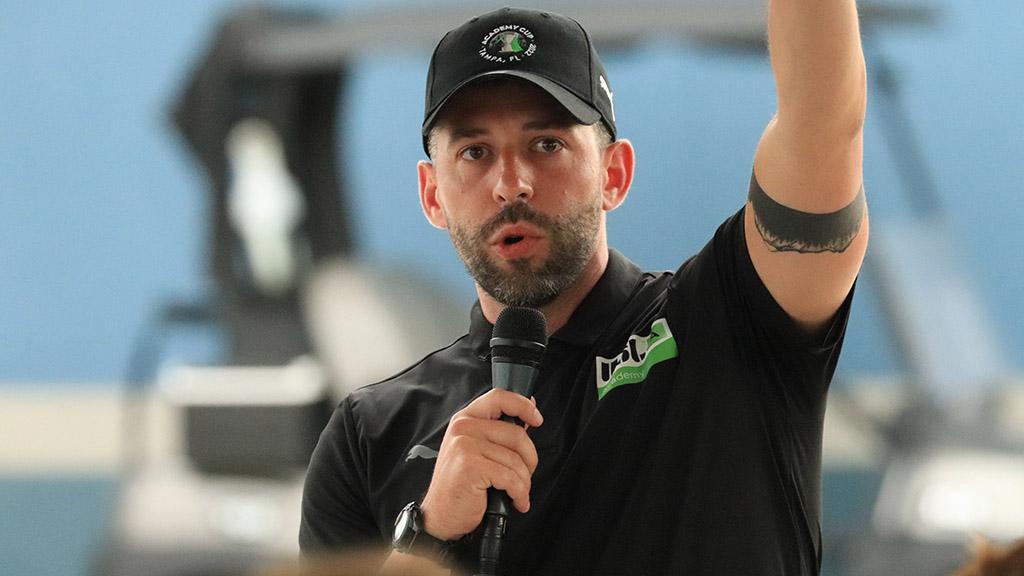 As the primary architect of the USL Academy program, there’s an element of Waggoner’s story that resonates more strongly than most for USL Technical Director Liam O’Connell.

“I myself grew up in somewhat rural New England,” said O’Connell. “Two hours from Boston, three hours from New York City in a very small town and I always wondered, ‘is the only way I can make it by leaving home at a young age?’”

It’s a reality that still existed until recently in many places. If you were a player talented enough to play professionally but weren’t in a place that could offer a professional club or training, you were likely headed somewhere that did. There are examples of where it has worked as intended – see El Paso, Texas native Ricardo Pepi’s move to join FC Dallas’ Academy, signing with North Texas SC – where he won the inaugural USL League One title in 2019, and rapid ascent to top-flight European soccer and the United States Men’s National Team before he turned 20 years old.

For Trevisani, though, the stories of talented players from New Mexico who headed north to Colorado to find that pathway were littered with tales of disappointment.

“It’s very difficult to develop your soccer talent, and it can be even more challenging when you need to move away from home,” said Trevisani. “When you’re taking 14-, 15-, 16-year-old players, and you’re sending them into strangers’ homes and putting them under the aegis of a coach that doesn't know really anything about them other than they can play soccer, you’re really setting yourself up for mostly negative outcomes.

“When I look at all the players from New Mexico that have gone up to Colorado into that system, almost all of them ended up coming home. And very, very few of them have had a positive outcome.”

As strongly as New Mexico United has been embraced by its supporters – recording the highest average attendance in the league for a second time this past regular season – the opportunities the club can offer on the field have already been on show. Cristian Nava became the club’s first Academy graduate to sign professionally in 2021, and the side has advanced to the USL Academy League Finals in each of its first two editions. 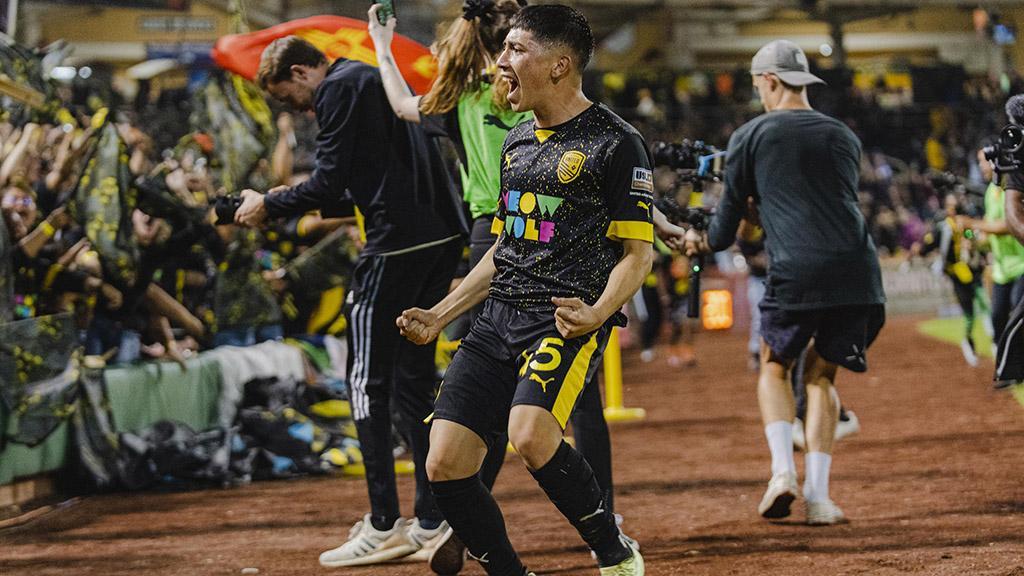 Where the bigger impact is being felt, though, is in college recruiting. Waggoner committed to the University of Michigan this past September, and the club’s ability to bring together the best talent from around the state to form a USL Academy squad has brought more visibility to others within the program.

“Before, it was really difficult to scout in New Mexico, because who are you going to come and scout? A club team, high school team, what's the level of competition?” said Trevisani. “Now we're getting coaches from Notre Dame, Michigan, Georgetown, all across the board who are coming to our academy games knowing that any number of those athletes on the field on either team could end up in their program.

“Now it’s worth their while, and when you have an Academy game in New Mexico, there's a dozen college coaches or scouts on the sideline taking notes and making offers like they did to Alex Waggoner and to Dane [Gallegos] this year, going off with the University of Denver.” 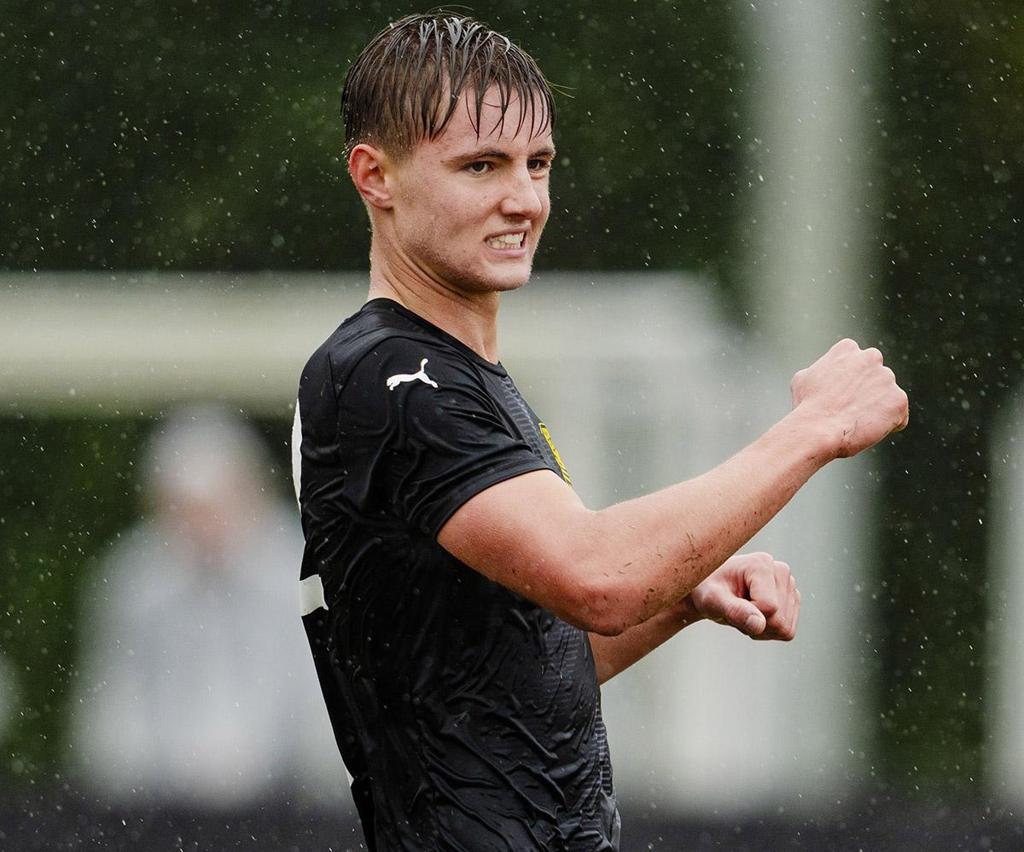 Alex Waggoner has commited to the University of Michigan for his college career, and is signed to a USL Academy contract for the upcoming season with New Mexico United. | Photo courtesy David Young / New Mexico United

For O’Connell, the spread of clubs now participating in the USL Academy League on the men’s side across the Championship, League One and League Two is putting more players like Waggoner and his teammates into situations where both the level of competition and visibility will be raised.

“The reality is that we are a large, rural, spread-out country,” said O’Connell. “While it's incredible, the sum of the professional academies and pre-professional academies being developed in many of the larger communities in metropolitan areas throughout the U.S., it is not always realistic to expect every young talent to gravitate towards those major markets. That’s one of the biggest things we believe in with the potential of what USL Academy offers.

“The overall landscape is an opportunity to have more academies in more communities. It gets more players from more communities integrated into this platform and getting exposure and opportunities to develop without forcing them to either commute and travel crazy amounts, or to up and leave their hometown as a young teenager.”

Waggoner capped his year at the 2022 USL Academy League Finals in late November with a remarkable display. Notching six goals and two assists in four games in the Playoff Division of the competition, he won the Golden Boot and was selected to the All-Tournament Team.

Delivering goal-scoring performances against some of the best teams USL Academy had to offer – including eventual title winners Tampa Bay United, Indy Eleven and San Antonio FC – the tools he has in his bag as a young forward were on display. 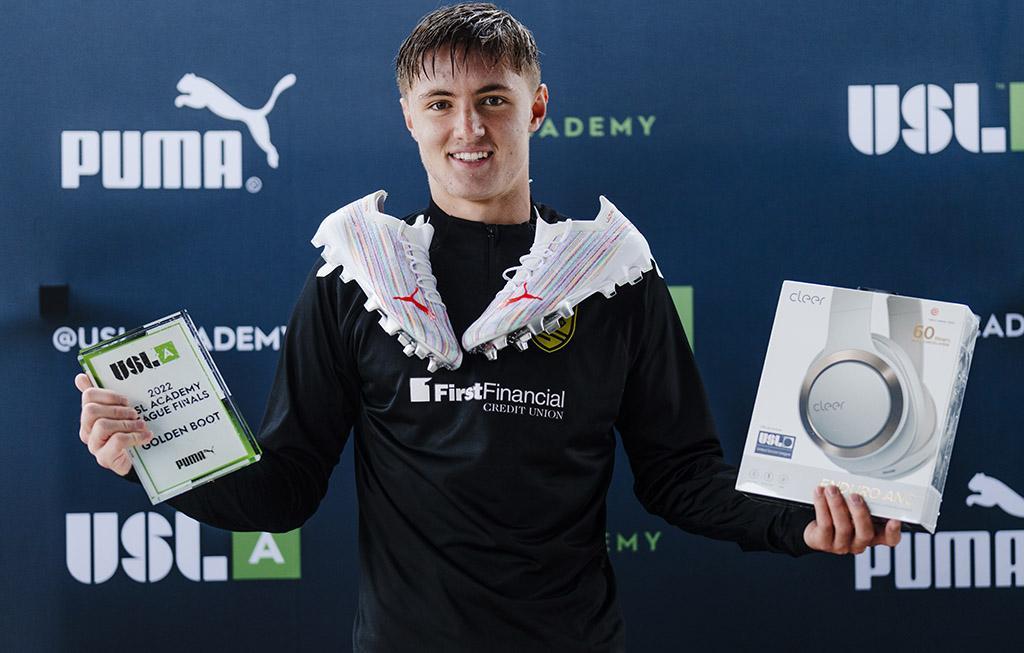 “He’s by no means your finished product,” said O’Connell, “but I think it was very evident to scouts as well as some of the pro clubs’ staff that we had at the event that he has the profile physically, technically with what he can do on the ball, tactically how he plays the position as a true center forward. He really has an opportunity to make an impact at the professional level.”

As evident as that current ability and potential was to those watching, there’s the question of where that leaves Waggoner in the bigger picture. It’s unfair to compare a teenager to one of the United States Men’s National Team’s greatest players in Clint Dempsey, but think about it?

The Texas native’s legend began in the town of Nacogdoches, population as of the last census 32,147, where he would commute hours to play for the Dallas Texans. It wasn’t until he arrived at Furman University that he got his first look at being a United States youth international, and that was in the days when college soccer was the foundation point for the United States U-20s, something it no longer is.

Coming from a similar background as a kid from an underserved community whose potential has been revealed, could Waggoner become the first New Mexico United player to get that chance? Given the ascent of another previously uncapped youth international like Louisville City FC’s Joshua Wynder this past year – earning nomination as a finalist for U.S. Soccer’s Young Player of the Year award – it might not be that far-fetched, but there’s still reason for doubt.

“Now with the USL Academy, now with New Mexico United, the infrastructure we brought in, the fact that we’re exporting our team to other states, we’re traveling to other tournaments outside of New Mexico, it’s impossible to ignore New Mexico anymore, and that's going to build pressure on the U.S. National Team which, you know, oftentimes has a very closed system where you get on the team at a very young age, and they don’t necessarily have many spots open along the way.” 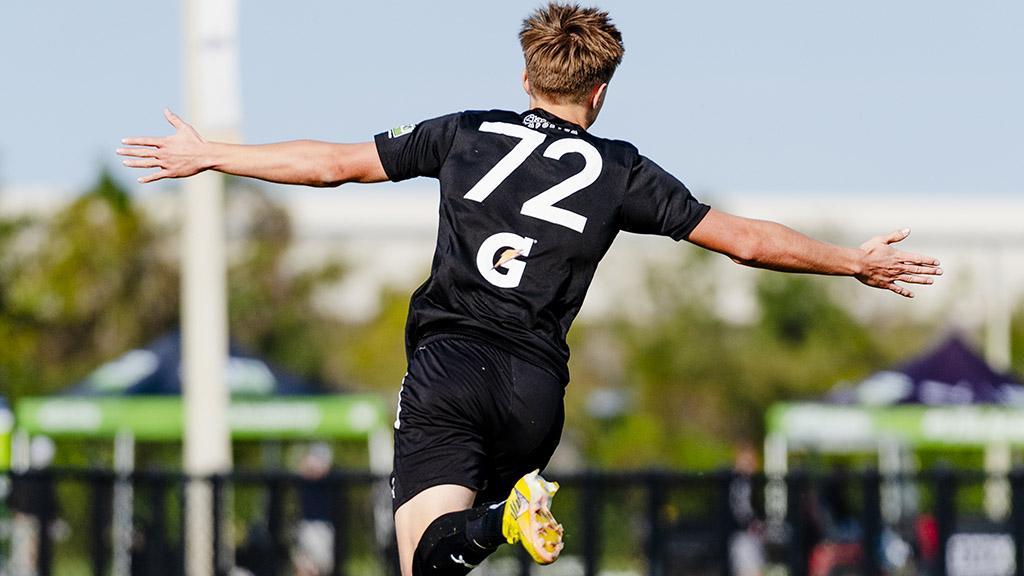 There’s certainly something about Waggoner, who says his belief in himself comes from his deep-seated Christian faith. It might say something about someone’s personality when their long-term aspiration in the club’s press release announcing their arrival to the club’s Academy isn’t to be a top professional, but rather “to be a good person.”

“I’m a pretty religious person,” said Waggoner. “I’m a Christian, and to be honest a lot of my confidence comes from practicing my religion on Sunday and my high respect for Jesus.”

This preseason, Waggoner will get his first chance at making the next step in New Mexico’s ranks as a USL Academy signing with United’s First Team. As challenging as that step might be, there’s no lack of confidence.

“My expectations are to play at the highest level possible,” he said. “I’d like to become a starter on the team and be someone that can score goals. That’s always been my goal.”

There’s no lack of confidence as to the player Waggoner could become from O’Connell, either.

“Every time he has been presented a new level to do it, he seems to excel and find a way to succeed,” said O’Connell. “I think it’s very evident with how he’s performed that there will be more opportunities for him beyond this collegiate one in front of him today. And if he chooses, he may have an opportunity to pursue a professional career himself.”

If it becomes reality, the door could open that much wider for those that follow.

“It’s exciting to see talent like this come from a place that probably would have been overlooked or underserved in years past,” said O’Connell. “And it makes us wonder how many more Alex Waggoner’s we’re going to be finding in years to come.”