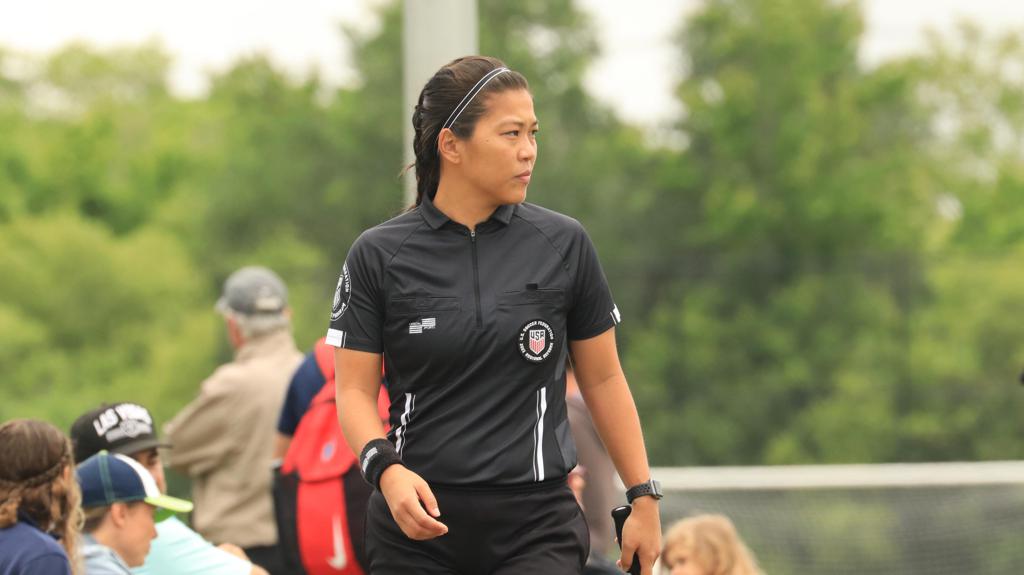 Kendall McCardell running the line during a U-19 Boys match between OVF Alliance and Peachtree City MOBA at 2022 USL Academy Cup.

USL Academy is a platform that bridges the gap between youth clubs and USL senior teams in USL League Two, USL League One, and USL Championship, offering players a clearer development path to their senior team. It also offers an opportunity for referees to showcase their abilities and earn advancement opportunities in higher-level leagues and events, which will help soccer continue to grow in the United States.

“Providing opportunities for referees to develop their career is valuable not only for those officials, but also the sport as a whole,” said Drayden Farci, USL Operations Coordinator of Pre-Professional Properties. “As the speed, technical ability of players, and tactics advance in American leagues, the games need referees who can handle the elevated level of play. USL Academy Cup provided an opportunity for referees to showcase themselves and receive invitations to higher-level competitions, moving them along the pathway to becoming a Regional or National Referee.”

The 2022 USL Academy Cup in Tampa, Fla. allowed 67 referees the opportunity to perform in front of a team of National Referee Coaches, including four former FIFA referees from across the world. 46 referees received assignments in the U-19 age group after being identified as being the most likely to make the jump to the Regional or National rank. As the Referee Coaches worked with crews in between games to review calls, positioning, and game management, they also took note of referees who should earn invitations to events that offer the next level of competition and training.

Four referees received invitations to other events based on their performances at USL Academy Cup. Erasmo Tejeda (Miami, Fla.), Kendall McCardell (Saint Petersburg, Fla.), and Carlos Morales-Lastra (Port Saint Lucie, Fla.) were invited to the US Adult Regionals event in Frisco, Texas. Tejeda was also invited to the Elite Academy National Championships and the Development Player League National Event in Dallas, Texas, joined by Corbin “CJ” Goodyear (Windermere, Fla.), Referee of the Tournament for USL Academy Cup. As a bonus during his travels, Tejeda was also assigned to USL Academy League matches in Texas.

“USL Academy has brought a high level of competition, allowing referees to be challenged every minute of the game,”  said Tejeda. “With this high-speed game keeping the referees quick on their feet and in their mind, it gave me the opportunity to be mentored in tough matches by PRO Referees as well as National Referee Coaches with a vast knowledge of the game.”

Tejeda upgraded to a Regional Referee in 2019, allowing him to officiate in higher-level competitions such as USL League Two, travel for events, and mentor younger referees. It has also exposed him to a higher level of education and training, such as that provided by USL Academy. Tejeda says, “The opportunity to work at USL Academy Cup, and the subsequent invitations to Adult Regionals, helped me learn and grow as a referee with the high knowledge and experienced coaching and officials I was surrounded with.”

This training will pay immediate dividends for clubs within Tejeda’s home territory, as well as long-term rewards when officials such as Tejeda take the next step in their careers – earning an assignment in a professional match.