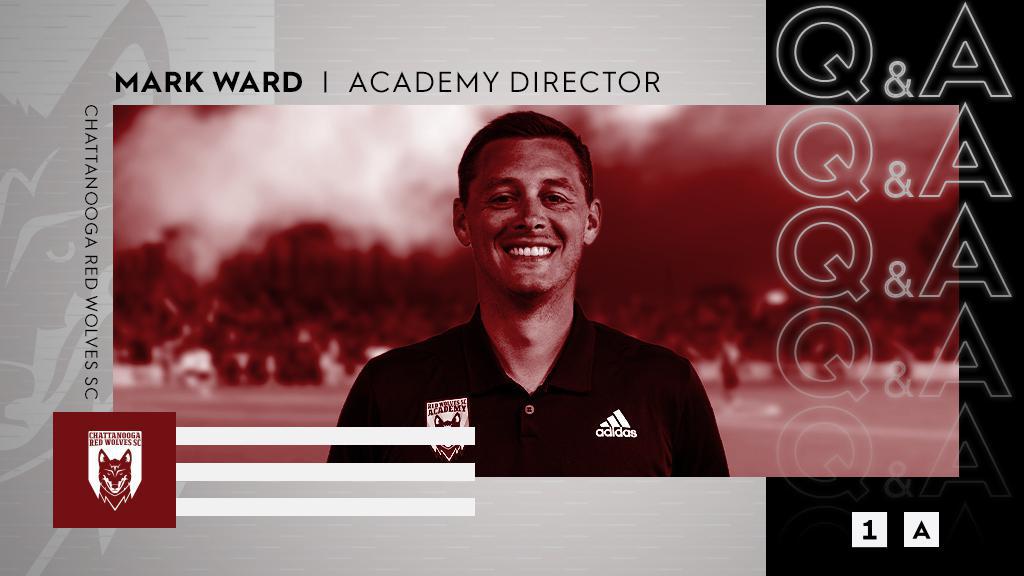 Since the launch of Chattanooga Red Wolves SC in 2018, one of the club’s aims alongside First Team success in USL League One has been to build a complete youth player development pipeline for players across the region. This year, that plan will continue as the club begins play in the USL Academy League’s Southeast Division, offering the next level of competition for players who are aiming to make the move from the Academy to the professional ranks.

This addition to the Red Wolves’ pipeline, which also includes a pair of teams that compete in USL League Two in Dalton Red Wolves SC in western Georgia and Park City Red Wolves SC in Utah, is another major step forward for a club that last year saw its first USL Academy signing – Cristian Zaragoza – make his USL League One debut.

As the Red Wolves prepare to open their USL Academy season early next month against Peachtree City MOBA, we caught up with Red Wolves Academy Age Group Director Mark Ward for an in-depth discussion.

Q: Last season, the Red Wolves saw Cristian Zaragoza become the first USL Academy signing to appear in a First Team game for the club. As the team enters the USL Academy League this year, how significant was that moment in terms of the potential pathway players could follow this year and beyond?

Mark Ward: Cristian Zaragoza is an amazing role model to our current academy players. He is not only a phenomenal player, but he's a kid with great character and a drive to continue to improve. Him being the club's first USL Academy contract signee, as well as, appearing in a First Team game was a huge step towards showing the community we as an organization are fully invested in the young players within it. We have a number of talented players in the Academy currently who look up to Zaragoza and want to emulate his success. We also want our Academy players to see that it is possible! With hard work, dedication to your craft, and a professional mentality, the pathway is open, being used, and taken seriously.

Our youth teams compete in one of the best youth leagues in the country in the ECNL and we use that to propel kids into our USL Academy teams. This helps us continue a pathway, keep the kids aspiring for more, and invest in each respective level of our youth programming. If youth players in Chattanooga or the surrounding area really want a shot at becoming a professional, then the Red Wolves are where they need to be.

Q: Having the connection to a pair of League Two clubs, particularly the nearby Dalton Red Wolves, means there will be the potential for the top players in the Red Wolves Academy to compete at that level alongside and against strong competition from the college ranks. How important do you believe that step will be for the U-17 and U-19 players in the program as they rise through the ranks?

MW: This is exactly why we have those USL League Two squads. It's the next step in some of our top players' pathways to achieve their ultimate goal of being a pro with the Chattanooga Red Wolves in USL League One. We currently have more than 10 current Academy players in the Dalton Red Wolves squad, with a number of Academy graduates also coming back home from their respective college programs to compete within USL League Two. Let's not forget about Park City either. Scott [Mackenzie] has done an amazing job not only coaching and recruiting talent in Utah, but he's got a great eye for talent and is able to show the strength of our Academy and USL League Two programs out West.

This next step is of massive importance to those kids in their individual development. Being able to compete with older, more experienced players is going to help them in the long run by not only being in a demanding training environment every day but also competing against some very talented USL League Two squads in the Southeast. Ultimately, we want to continue pushing our top players into our USL Academy teams, our USL League Two teams, and finally our USL League One team.

Q: We’ve seen the way other clubs – especially those in the USL Championship – have integrated their Academy to First Team pipeline, giving young players a chance to train alongside the First Team on a week-to-week basis. Have you talked with other clubs about how to best implement that integration for players, so they’ll get the full benefit of the opportunity presented to them?

MW: Absolutely. We think it's important that we create these types of relationships with other clubs because everyone does things differently. Everyone's market is different, but it all comes back to growing the game and doing what's best for the kids. We've had conversations with numerous clubs, and everyone has been such a great resource. With different experiences comes different bases of knowledge. Being able to pick the brains of some of the top soccer brains in the country has been a huge help. The USL Academy staff has also been great with new ideas and new ways to implement the pathway, how to integrate players, and how to educate your market on what exactly it is you're trying to accomplish.

Q: Training alongside the professionals at the clubs is obviously a big element here, but the other major potential area for growth for young players is in developing good off-field habits from the pros they’re training alongside. How important is that part of a player’s development alongside getting a feel for the speed and requirements of the professional game?

MW: One of the very best things our organization does is allow the First Team players the ability to interact with the Academy players. It's not uncommon to see the First Team guys strolling through the training ground, pop in the Academy offices to say hello, take time after a tough match to speak with families, etc. the list goes on. Coach Jimmy Obleda has created a culture in the locker room that guys want to be part of, and it has a trickle-down effect on the Academy. Just last week Juan Galindrez and Ualefi stopped at the training ground and watched our top U13 and U14 teams compete in a friendly and train. The boys had the opportunity to pick their brains on what it means to be a pro, how they carry themselves, what sacrifices they had to make to achieve their goals, and so on.

On the opposite end, we're going to start having some older Academy players join First Team training when it's appropriate for them. There are a few on the radar for the front office and Coach Obleda and as soon as they can be integrated into the team they will. Those players are going to learn so much from playing with the First Team guys that go beyond the initial ideas of “playing soccer.” There's a different mentality, different approach to training and games, as well as taking care of your body. It's a huge advantage for our Academy players to see, feel, and be thrown into that environment.

Q: We’ve seen players make the move into the professional ranks from Dalton and Park City to Chattanooga in prior years, including someone like Jonathan Ricketts, who has now moved up to the USL Championship with Rio Grande Valley FC. How soon do you think we might see a player who can go directly from the Red Wolves Academy to a professional contract now this pathway is fully established?

MW: With this platform and competition in the USL Academy, along with our other programming to complete the pathway, we have set the goal of having someone sign a pro contract by 2024 and having some USL Academy signings as early as this year. Of course, there are a lot of variables to this and the players themselves need to show the right stuff, but our staff is one of the best in the Southeast and we have full confidence that we can not only produce the top level of players into the First Team environment but the talent that can continue to move up the professional ladder like Jonathan Ricketts.

Having a former USL League One Head Coach – [former South Georgia Tormenta FC Head Coach John Miglarese] – as part of our U19 staff and overseeing the processes of USL Academy has been a huge pickup for our Academy. The training environment is competitive and demanding, the tactical knowledge is always growing, and you can tell our players have really benefitted from this. We like to use the phrase “develop from within,” meaning we don't offer Academy contracts or places within our USL Academy set up to just anyone. We want players to be full-time within our programming and develop within our setup. This is another reason why we have had a countless number of kids go to high-level college environments, our USL League Two environments, and have found successes in the other youth programming. We develop from within and prepare the players for what's next for them individually.