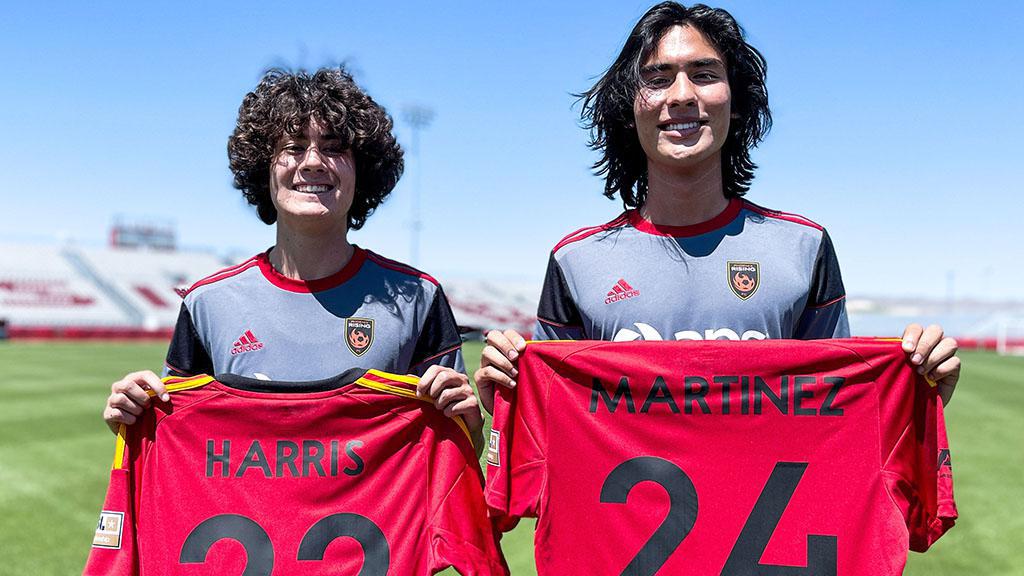 Jacob Harris and Josh Martinez have joined Phoenix Rising FC as USL Academy signings for the 2022 USL Championship season, having come through the club's academy ranks since each joining at the age of 8 years old. | Photo courtesy Phoenix Rising FC

USL Academy contracts allow players to retain college eligibility while also being eligible to play for in the USL Championship and Lamar Hunt U.S. Open Cup for a club’s First Team. Harris and Martinez are the eighth and ninth Phoenix Rising Academy players to be signed to First Team contracts. The two joined the Phoenix Rising Academy upon its inception in 2012. Both were eight years old at the time.

“I love playing with Josh,” said Harris. “We have a lot of chemistry and history playing together. I’m super excited to have the opportunity to play with him at the next level. I remember being at the very first game for Phoenix Rising in 2017. It’s crazy. Going from a fan in the stands to now playing for the team. This is an opportunity I’ve always dreamed about. I’m really excited to get to work and contribute to the team.”

Both players were at their local high schools when they learned that were being offered the chance to join Rising FC's USL Championship squad.

“I was actually in class when I received the news,” said Martinez, who attends Hamilton High School in Chandler. “I was supposed to be learning something at the time, but I was really excited, and it was hard for me to focus.”

“I was at school and my dad called me to say that Rising wanted to sign me,” added Harris. “We were at the Fine Arts Center doing our senior graduation orientation. We were collecting our caps and gowns, talking about graduation and prom.”

Both midfielders, Harris and Martinez saw extended playing time this preseason against teams like Valley United FC and Detroit City FC. The duo will provide Rising FC with depth in the central midfield.

“Jacob is a very hard-working, very active central midfield player,” said Assistant Coach & PRFC Academy Technical Director Danny Stone. “He plays a bit more like an eight. He plays a little more forward than Josh, getting into attacking areas. He has come in and worked with the first team a lot in the last two years. He never looks out of place playing at that higher level. That’s a big task for a younger player.

“Josh is a more of a defensive midfielder, but he is very good passer of the ball in possession. He is intelligent in his understanding of the game. Josh links the game from back-to-front very well. He has improved in his reading of the game and competitiveness recently.”