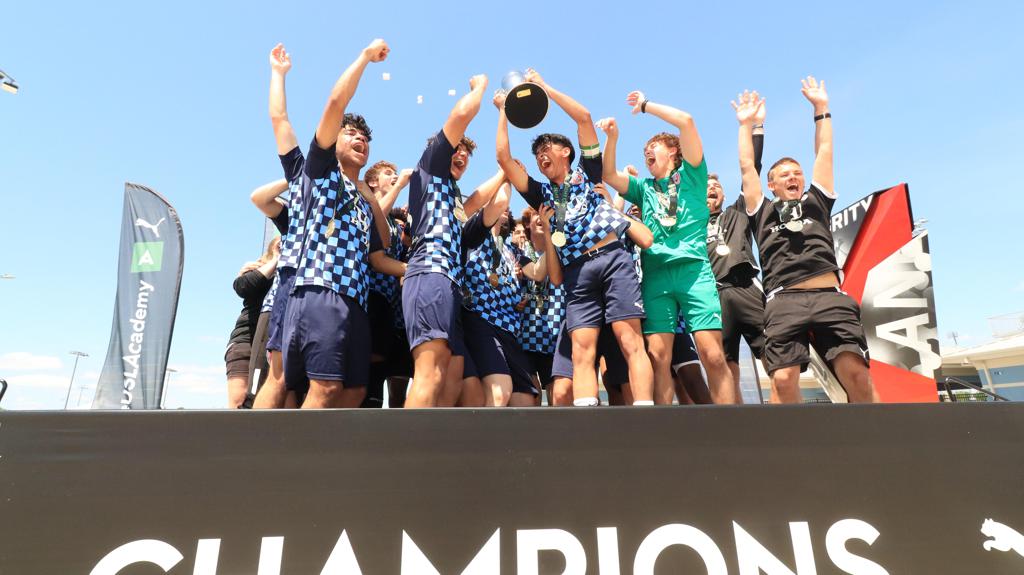 Sunday afternoon saw the 2022 Academy Cup draw to a close with all the drama fitting for a cup final. From last-minute headers to a penalty shootout, every team stepped up with trophies on the line.

To start the morning, Indy Eleven and Weston FC duked it out in the U-15 Boys’ Elite final. Things looked all wrapped up for the club from Indiana when they put their second score away to make the game 2-1. It wasn’t until the very last kick of normal time, that Weston was able to equalize on a sweeping corner kick, finished off in the air by Hilario Leal.

Their celebration had to end quickly, however, as they had to steel themselves for extra time. And as extra time carried on, it was a game-winner from Chase Carroll that gave Weston FC the 3-2 win, where it looked like an insurmountable lead just 20 minutes earlier.

The U-13 Boys Elite final was no less dramatic, as there wasn’t a score in live play at all, and it had to be decided in penalties. Weston FC put away four critical penalties in the shootout, and were able to stop three from coming into their net as they celebrated a second trophy that morning.

In the U-19 Girls Elite final between NC Fusion and Indy Eleven, who upset Greenville Triumph to qualify for the game, it was the only Elite final to finish in normal time. NC Fusion scored the lone goal in the intense defensive affair to walk away with the victory. A stellar performance from midfielder Molly Widderich led to her being voted by her teammates as the team’s MVP en route to their Cup final win.

And, as other games wrapped up around them, all eyes turned toward the U-19 Boys Elite final between Indy Eleven and Tampa Bay United. Tampa Bay went up early on a scrambling goal in the box, and seemed in control of the game until Tampa defender Rainier McKinzy was sent off for a second yellow card.

Down to 10 players, Indy quickly capitalized in the next couple attacks and leveled the game. They seemed to be in the driver’s seat, until former Golden Ball winner Asher Jones whipped a free kick into the box for a header to put Tampa back in front, despite being shorthanded.

But as time wound down, a critical foul in the box led to a converted penalty – a skill the team would need as extra time went scoreless. A great diving save from Alex Svetanoff put Indy ahead in the shootout, but a penalty that went wide meant he’d have to defend again. At least, that was the case, until Tampa Bay United’s final penalty attempt sailed over the crossbar, and Indy Eleven were named U-19 Boys Elite champions.