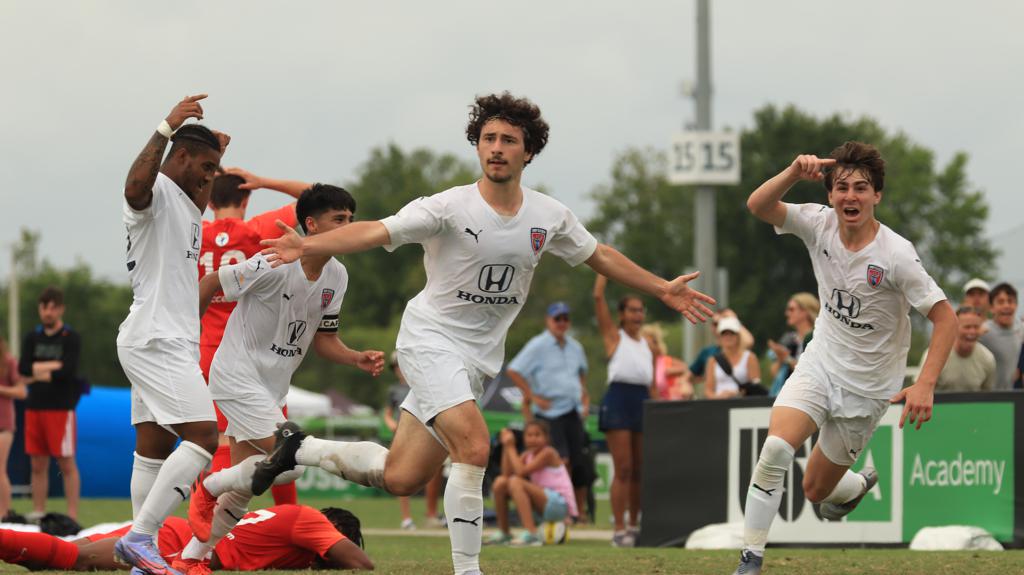 TAMPA, Fla. - An exciting Day Three at the 2022 USL Academy Cup wrapped up the group stage with fireworks all over the Tournament Sportsplex of Tampa Bay. The group stages wrapped up on Sunday, giving us a clear picture of the championship games coming on the final day of the Academy Cup.

The morning started with Queensboro FC II scoring two goals to go to the top of the U-19 Boys Elite group A, but their opponent Weston FC pulled one back to reduce their goal difference to just four on the weekend. That late goal by Weston would come back to haunt them later that afternoon.

Weston FC would fare better in the U-15 Boys Elite division, as they won their group with a 1-0 win over Hartford Athletic at 10 a.m. to finish the group stage 2-0-1. They’ll take on Indy Eleven (2-0-1) for silverware on Sunday.

In the U-13 Boys Elite division, Tampa Bay United stole the show with another dominant victory, this time 7-0 against Wake FC. That brings their goal total to 17 on the weekend, without a single score conceded on their end. They’ll try to continue that dominance against Weston FC (2-0-1) for the chance to win their division Sunday.

In the U-19 Girls division, Greenville Triumph – the most dominant team through the first two days – was shocked in a 0-1 defeat by Indy Eleven. With the victory, Indy Eleven moves to the top of Group A to send Greenville, who still have a +9 goal difference, to second place in the group. Indy Eleven will take on NC Fusion (3-0-0) in the final tomorrow.

And finally, to wrap up the day, the deciding game for the U-19 Boys’ Group A: Real Colorado vs. Indy Eleven. To win the group on goal difference, Indy needed to score at least three goals. They’d be sweating out every minute, as the third and final goal in their 3-0 victory came with just minutes remaining against Colorado to win the group over playoff rivals Queensboro FC II.

Indy Eleven will move on to face NC Fusion (3-0-0) for silverware during Sunday’s contests.