Physicality Carries the Day on Day One of 2022 Academy Cup 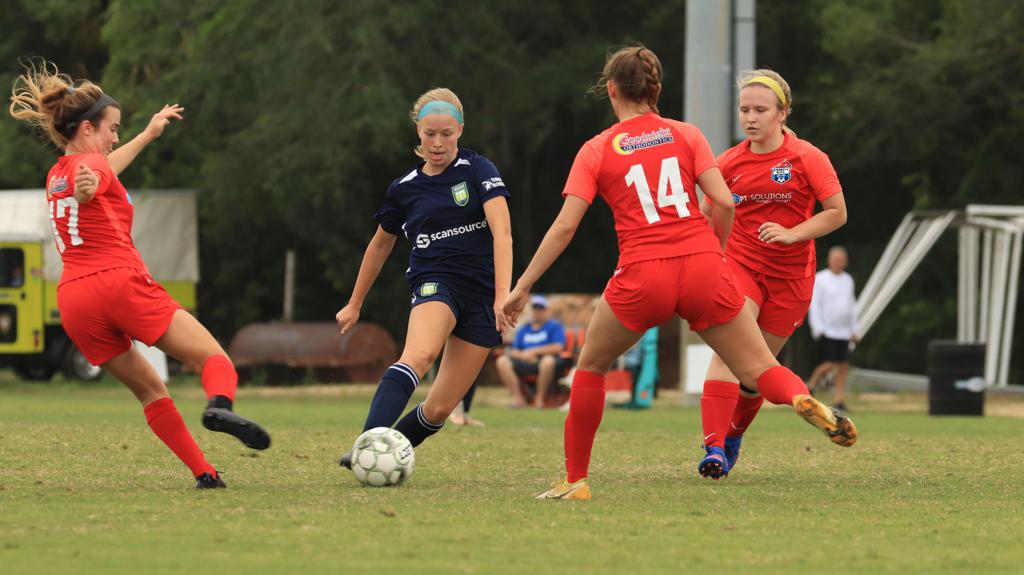 An action-packed Thursday at the 2022 USL Academy Cup saw a few clubs separate themselves from the pack early. Throughout the Tournament Sportsplex of Tampa Bay, dozens of clubs put their best foot forward in pursuit of silverware.

The morning headliner was Queensboro FC II’s hard-fought 1-0 win over Real Colorado in the U-19 Boys’ Elite division. Every loose ball, cross and challenge was contested as Mario Salguero’s strike in the 5th minute remained the difference in the hotly contested game. Queensboro defender Moussa Diarra was a stalwart during the game, turning away most promising Real Colorado attacks.

And when Diarra and the rest of the back line was broken through, it was Brian Urguilez stepping up in net and making critical saves to take all three points to start the weekend. A point-blank save kept the clean sheet off a promising Real Colorado free kick outside the left side of the box.

On the other end of the complex, in the U-13 Boys Elite division, a whopping six goal scorers put eight goals across for Tampa Bay United in their morning clash with Southern Soccer Academy, while keeping a clean sheet in the battle. John Pericles and Aarav Guha Sarkar both scored braces in the dominant effort, carrying their side to victory.

In the U-19 Girls division, Tampa Bay United was on the wrong end of domination as Greenville Triumph put seven goals across, asserting their victory on Field 2 to take the early lead in Group A. A morning draw between Indy Eleven and AC Connecticut puts Triumph in the driver’s seat to end the first day.

The most hotly contested Elite group after the day’s contests is the U-15 Boys Group A – only two goals separate first and last place after a 2-1 victory from Hartford Athletic over Wake FC, and a 1-1 draw between Louisville City FC and Weston FC.

In the Premier and Select divisions, big days from Ironbound SC (6-0 win in U-15 Boys) and Greenville Triumph (4-0 win in U-13 Boys) set the tone in their respective groups.

The wind took over around midday, making an aerial attack nearly impossible for teams, but not before Indy Eleven was able to work a 1-0 win, chasing Queensboro FC II in the U-19 Boys Elite Group A.

Games will kick off at 8 am on Friday at teams continue to pursue silverware during this year's Academy Cup.