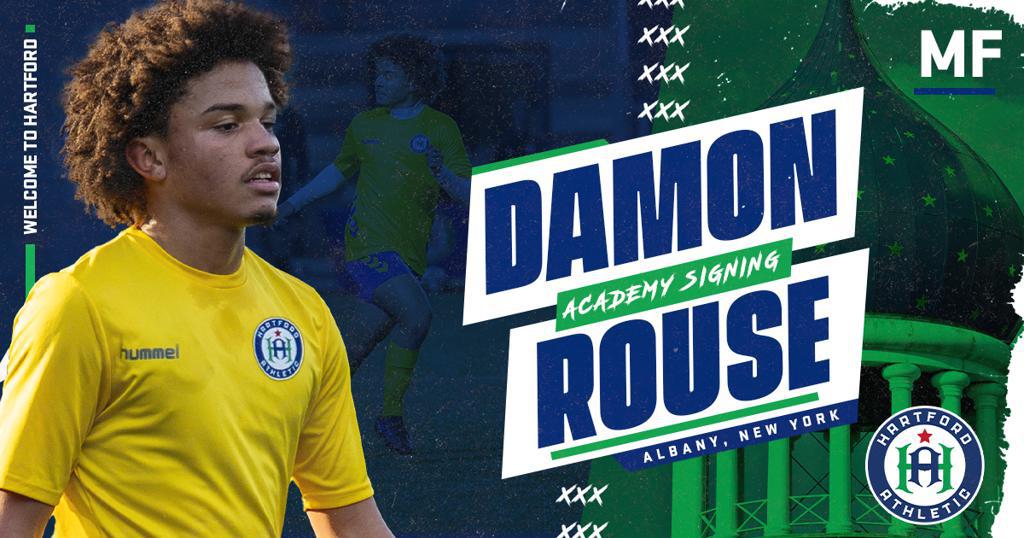 HARTFORD, Conn. – Hartford Athletic announced on Thursday it had signed Damon Rouse to a USL Academy contract ahead of the 2022 USL Championship season, pending league and federation approval. At just 16-years-old, Rouse is the youngest player to sign with Hartford Athletic in club history.

“I have not been this excited about a young player in some time,” said Hartford Head Coach Harry Watling. “Last season we made a statement when signing Kenan Hot, and this season adding Damon and Pearse, you can see our intention to push our talented Academy players into the first team spotlight. Damon comes equipped with a skill set to play a number of positions, however, his biggest asset at this stage is that he has a fearless approach to being with the older pros.”

As a USL Academy signing, Rouse is able to train and play for Hartford Athletic in both the USL Championship and 2022 Lamar Hunt U.S. Open Cup while retaining his NCAA eligibility. The Albany, New York native spent the 2021 season with NYCFC academy and has participated in US Soccer Youth National team training camps at the U14 and U15 level.

“Hartford Athletic is a great fit for me, and I am so excited to have the opportunity to train and play at the professional level,” said Rouse. “Being in Hartford and competing with the first team players every single day has been an outstanding experience for me. Coach Watling has created a great plan for my development, and I’m working hard every day to earn my way on the pitch.”

As part of Hartford Athletic’s professional pathway, Damon joins Hartford after competing with affiliate club AC Connecticut in the USL Academy Showcase. He is the second academy contract signing of 2022, joining West Hartford native Pearse O’Brien. The two players have been training with Hartford Athletic’s first team throughout the entirety of preseason and are expected to continue to do so during the regular season.

“Damon has really accelerated his ascent on our player development pathway,” said Hartford Athletic Academy Director Robin Schuppert. “He performed very well at the USL Academy Championships in December, which ultimately earned him an invitation to preseason. We have a great staff of coaches in our Academy who can identify and develop elite youth players from our area, and a first team manager in Harry who is eager to work with them. Together, we have opened the door for our youth players to continue to develop in a professional setting. Damon has a unique mindset, coupled with great talent, and will do whatever it takes to push forward. I’m excited to continue to watch him develop with our club.”