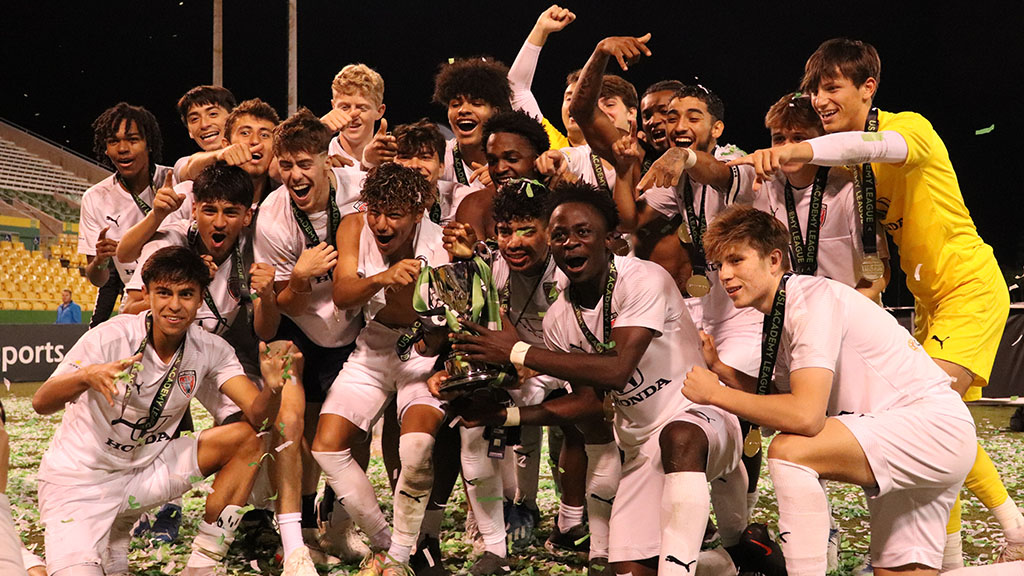 ST. PETERSBURG, Fla. – Diego Sanchez recorded a goal and assist as Indy Eleven claimed a 3-0 victory against Queensboro FC to win the Final of the 2021 USL Academy Playoffs on Sunday night at Al Lang Stadium. Diego Rodriguez and Palmer Ault also found the net for the Boys in Blue, which ended the tournament with four wins from four to wrap up 2021 USL Academy League season.

Indy created the first moment of danger in the 11th minute when Ault held the ball up near midfield and played a through-ball into space for Kabiru Gafar, who broke forward and rounded the goalkeeper to his right only to be denied on a low finish by a sliding block by Queensboro defender Esteban Espinosa. From the ensuing corner kick, however, Indy opened the scoring as Rodriguez’s header off Sanchez’s delivery near the top of the six-yard area to a big hop off the turf and found the left corner of the net.

Sanchez added a second for Indy in the 22nd minute after the side was awarded a free kick to the right of center 25 yards from goal. The 16-year-old stepped up and delivered a beautiful left-footed strike into the top-right corner of the net, leaving the goalkeeper little chance to add to his earlier assist.

Guatemalan U-20 international Nestor Cabrera had the first good look for QBFC on the half-hour mark as he regained possession in the Indy half with a good tackle and quickly drove forward for a shot that went over the crossbar. A minute later Piero Elias drove through midfield and took a shot from 25 yards toward the bottom-right corner that was handled by Indy goalkeeper Alex Sventanoff, while in the final minute of the half Moussa Diarra headed just wide of the left post off a corner kick from the right.

Queensboro’s pressure continued into the second half, and it could have been awarded a penalty kick in the 42nd minute when Cristian LoGrasso appeared to be brought down as he drove into the box. As QBFC pressed, however, Indy withstood the pressure and did well to limit clear looks on Svetanoff’s goal as the goalkeeper himself commanded his six-yard area confidently.

Indy put the game away with nine minutes to play, however, as Alann Torres won possession in midfield and slid a pass through to Gafar, who turned centrally at the top of the penalty area and slipped in Ault as he arrived to finish at the second attempt after his initial effort was parried by QBFC goalkeeper Pol Rodriguez.

QBFC almost answered two minutes later when another spell of pressure produced a turning shot for Gabriel Enriquez that he sent high of the target, and it continued to push forward in the closing stages in search of a goal. Indy’s defense held firm, however, to earn a shutout to close out the result and claim the title.