After Championship debut in September, path for young playmaker’s future is opening wider 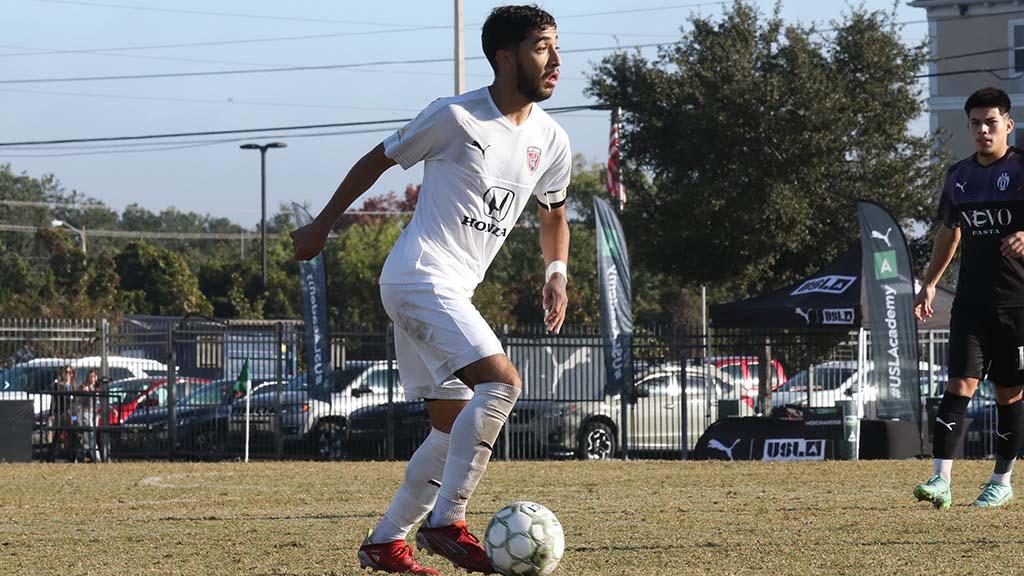 TAMPA, Fla. – You could have forgiven Alann Torres a few nerves as he stepped onto the field for Indy Eleven for the first time in the USL Championship a couple of days before his 18th birthday in September.

Those were certainly there for the Elkhart, Indiana native as he made his debut in the professional ranks against Memphis 901 FC at AutoZone Park, but there was something bigger as well.

“Nervous a little bit, but I was more excited than anything,” said Torres. “It was my big day.”

When you see Torres’ game and confidence, it’s easy to understand where that mentality comes from.

“He does things I don’t expect, so he’s unpredictable,” said Indiana Fire Juniors Academy Director Kiki Wallace. “There are times where the ball comes to him and you think he’s going to turn one way or do something with it, and he does something with it that you didn’t even realize was an option. His awareness to know space, know where defenders are and then unbalance has been outstanding, and he’s had that since we discovered him. That predates us.”

It’s also a reason why Torres was among the players that got the chance to play as USL Academy signings for the Boys in Blue in the 2021 USL Championship season, with the young playmaker also earning two starts late in the season, the second against Atlanta United 2 coming in front of the club’s home fans at Michael A. Carroll Stadium on October 2.

This week, Torres’ talent has been on display at the USL Academy Playoffs, where with two goals and two assists he’s proven a central figure as Indy advanced to Sunday’s Final against Queenboro FC at Al Lang Stadium, (6:30 p.m. ET | YouTube). Building on the partnership between Indy Eleven and the Indiana Fire Juniors, the Academy side led by Wallace – which also features former MLS goalkeeper Jon Busch on its staff – has produced fine passages of play with Torres, other USL Academy signings like Diego Sanchez and forward Kabiru Gafar leading the side’s success. 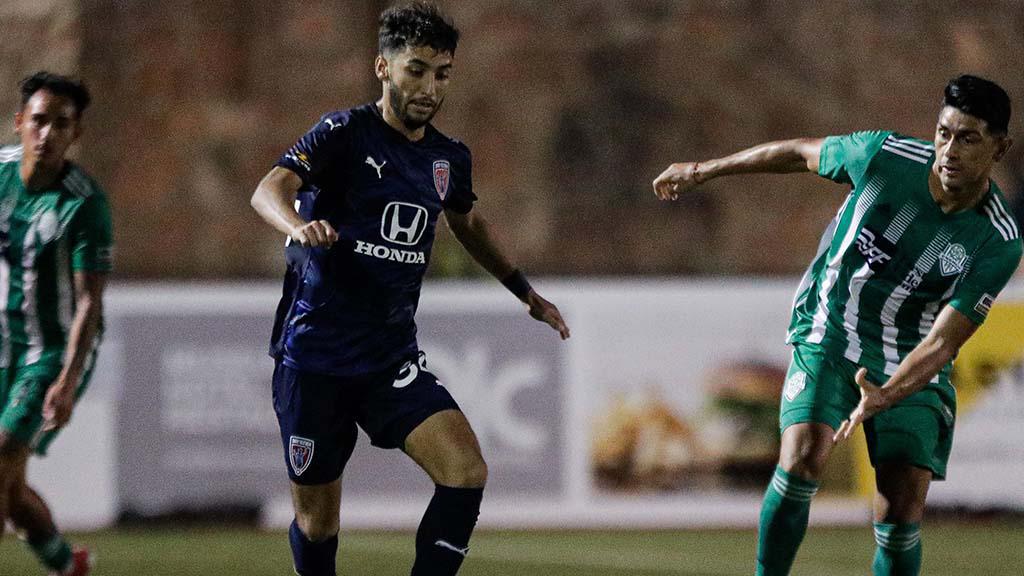 Alann Torres made his first start in the Championship for Indy Eleven this past September on the road against OKC Energy FC. | Photo courtesy Steven Christy / OKC Energy FC

For Torres, the opportunity he’s received in training alongside Indy’s First Team over the past months has been a valuable learning tool in addition to the chances to compete in the Championship. He credits the quartet of Ayoze, Manuel Aretaga, Gershon Koffie and Aboubacar Sissoko as role models, with their quality and work ethic illustrating what it takes to get to that next level individually.

“It helps me grow as a player,” said Torres. “[Arteaga] brings in that mentality as a player every single day in practice and we have to match that. That’s what the standards are, and we grow as a team.”

Torres’ success – and that of Josh Penn, who served as a predecessor in making the step from the Academy to a professional contract with Indy after his freshman season at Indiana University – is making him and the others who have joined Indy’s First Team the role models for the players currently in younger age groups within the Fire Juniors.

At the same time, the success that is now being seen in the Championship by young standouts such Louisville City FC’s Jonathan Gomez, who on Friday was named in the latest U.S. Men’s National Team squad and in January will officially join La Liga’s Real Sociedad, El Paso Locomotive FC’s Diego Luna, San Antonio FC’s Jose Gallegos and Orange County SC’s Kobi Henry, who also earned his first USMNT call-up on Friday, is opening the door wider for those looking to follow in their footsteps professionally.

“In the same way that I think Alann and others on our team are laying a new path for those behind them and younger players, I think Diego Luna and Jonathan Gomez are making a path for guys like Alann to follow,” said Wallace. “It’s two-fold, it’s both directions. I know he has some big aspirations maybe even beyond Indy Eleven, but it’s pretty cool that Indy Eleven gets to be a part of it.

“I think for the growth and development of the game we’re seeing the right thing where we’re developing players and we’re moving them onto the next level, and it’s cool to see that the USL had got to a point where that is a pathway to higher level leagues and leagues overseas, and not just MLS.” 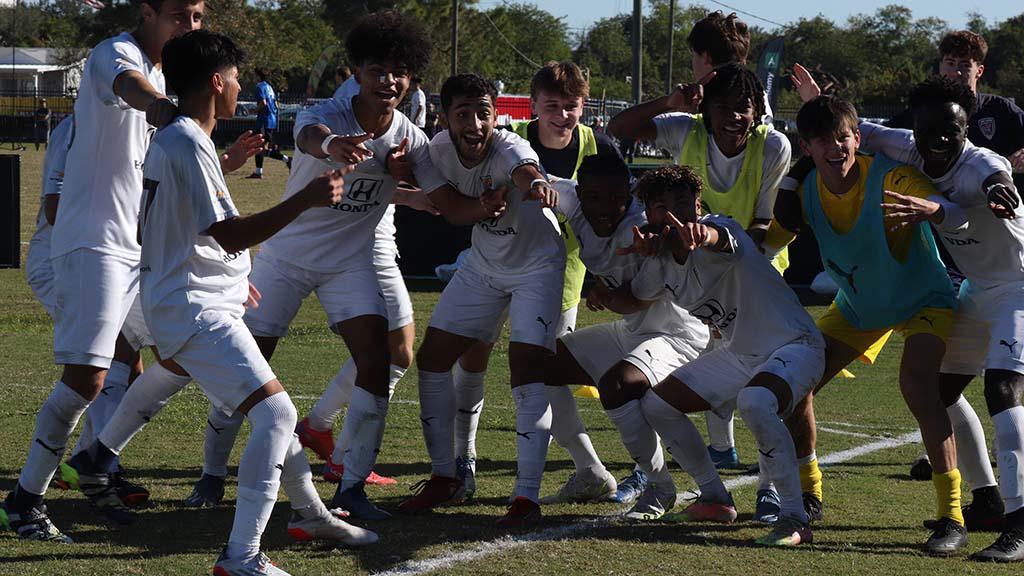 If Torres’ progression continues, that opportunity could come as early as next season in the Championship. With the appointment of Mark Lowry – who guided Luna to a successful first season in the professional ranks this year that saw him nominated as one of the finalists for the Championship’s Young Player of the Year award – coming aboard as the Eleven’s new Head Coach, the opportunity could be there for players like Torres to grasp and make a name for themselves in the professional ranks.

“I think we have a couple that were on the field today that are in consideration to get a pro contract in the next 6-to-18 months, and I believe when you look through the Academy there are other guys with that same kind of potential,” said Wallace. “It’s an exciting time, certainly our Academy has grown a lot and the ties with Indy Eleven have only strengthened it further.”

As he prepares for one final game this season under the lights with a title on the line, Torres will be one to watch on Sunday and as 2022 unfolds.