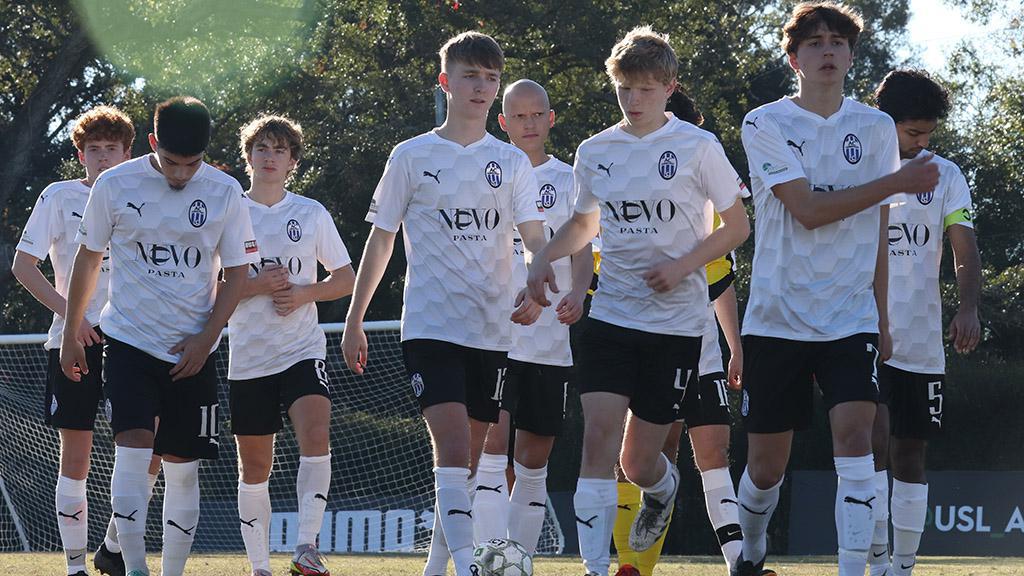 AC Connecticut fell in its opening game of the USL Academy Playoffs on Thursday, but the club's growth and partnership with Hartford Athletic is proving a boon for soccer in the Nutmeg State. | Photo courtesy Clay Benjamin / United Soccer Leagues

TAMPA, Fla. – Soccer can be a cruel sport sometimes.

AC Connecticut’s USL Academy team found that out the hard way on Thursday as a late goal by the Charlotte Independence claimed a 4-3 victory on the opening day of the USL Academy Playoffs at the Waters Sportsplex, capping a back-and-forth battle between two talented sides.

But for ACC Head Coach Antony Howard, simply getting the opportunity for his side to test itself against the best teams from around the nation to close the 2021 campaign this week is a major reward for the work the club and players have put in to earn a place at the table.

“At the beginning of the year our goal was to try and compete and make Connecticut soccer and AC Connecticut proud of the players we had up there,” said Howard. “Then, all of a sudden, we find ourselves here as a Wild Card and playing against some of the best players in the country. [The Independence] were a phenomenal team today … but the boys are just so excited to be here and showcase, and for us as a club we’re just proud we could be here. This is a great event, something that for some of these guys is going to be the highlight of their career as a soccer player.”

What AC Connecticut is now part of in the Nutmeg State goes beyond whatever results this week brings. Having been a longstanding member of USL League Two, which sits at the top of its academy program, the club has been working to develop talent in the state and surrounding areas for a number of years. The arrival of Hartford Athletic as an expansion side in the USL Championship in 2019 has also seen the two clubs collaborate this year in player development, including the loan of 19-year-old local standout Alfonso Vazquez – who signed professionally with Hartford prior to the 2020 season – to the ACC side competing in the USL Academy League this season as he continued his development.

With the goal of reaching the professional ranks now an attainable one for players coming up through AC Connecticut’s ranks, the club is now looking to become a place where future Athletic players get their start.

“It starts from the grassroots and educating our young players what’s going on and that opportunity to see on their doorstep what’s going on down the line,” said Howard. “Ultimately, I think we want to be able to provide Hartford with better talent coming up. That’s got to be the No. 1 goal. That’s something we’ll be proud of is how many players can we produce at that next level, that’s really the next step for us, being able to turn around every year and tell Hartford, here’s two, three, four, five players that you should be considering for the Championship level.”

One of those was midfielder Luke Hoening, for whom the opportunity to test himself both in training and in live games against older, more experienced opposition proved invaluable.

“It’s definitely a privilege to have that opportunity, especially to play with guys with a higher physicality,” said Hoening. “Obviously, this game is so quick but then to be competing against adults, full-grown men it’s another thing. I’m just grateful that me and my mates from around Connecticut and New York, we get the opportunity to play against the best players in the U.S.”

AC Connecticut will get two more major tests in the next two days of the USL Academy Playoffs as they face Indy Eleven and San Antonio FC, two other USL Championship clubs that have placed a premium on their own development programs. Howard believes his players will learn a lot from seeing what else is out there in terms of talent for his own players to aspire to match, but he also expects the experience the players are getting will be one that leads others to follow in their footsteps with the goal of one day turning pro.

“I just hope it drums up the interest,” said Howard. “The great thing now with all these kids having social media and whatever else, word spreads very quick, and when you see a local lad going through the process, the interest grows. Now, it could take a year or two before you see the real fruition for what’s happening, but hopefully the bottom line is we hope to get more kids interested in the game, more and better players coming out, and more players in the USL system. That’s the key.”