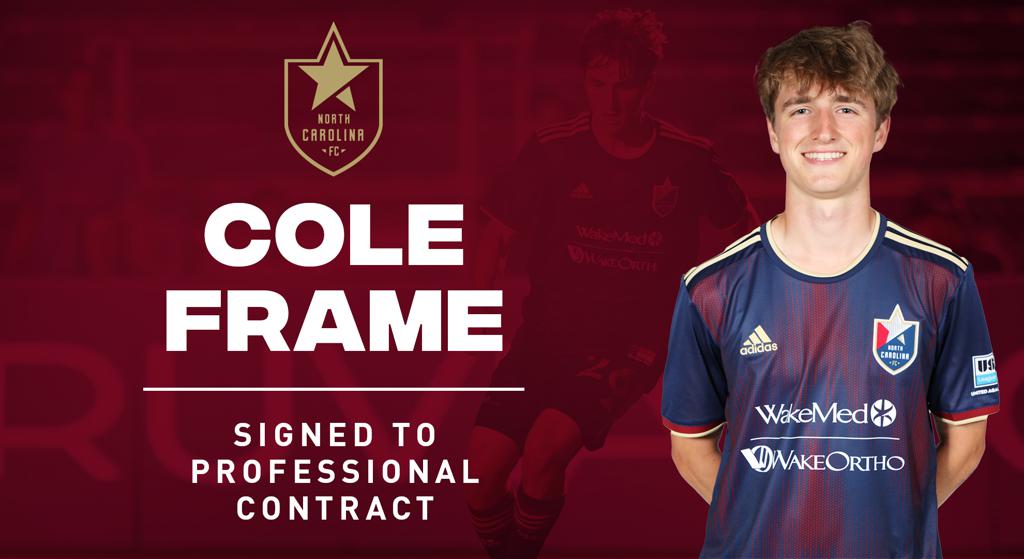 Frame has been a part of the club for over 13 years and now joins recent signee and teammate Nicholas Holliday, as another standout academy player to ink a professional contract with the club this season. The signing of these two young stars represents NCFC’s overall goal of developing young talent and investing in players with winning mentalities who will continue to make a positive impact on the club’s future success.

Since signing an amateur contract with North Carolina FC in March of this year, Cole Frame has appeared in 17 matches, clocking 827 minutes of playing time and scoring three goals. The midfielder made his professional debut against the Greenville Triumph earlier this season, coming in as a substitute in the second half. Since his first appearance with the team, Frame has been a member of the starting lineup six times and has also become an impactful player off the bench, logging two of his goals upon entering the match as a substitute.

“I am thankful and excited to sign my first professional contract with North Carolina FC,” Cole Frame said. “For as long as I can remember my goal and dream has been to play professional soccer. I am grateful for the many coaches and teammates that have contributed to my development, along with the support I continue to receive from North Carolina FC. I am fortunate to be starting my professional career at the club I have been with since I was 7, and I am excited to see what we can accomplish now and in the future. It’s certainly a special moment that I will always cherish, but not for too long, as there is more work to be done!"

The 18-year-old first joined the NCFC youth program in 2009 and has continued to develop and compete through multiple levels of the club. Highlights of his career include winning the 2016 USYS National Championship with his U13 CASL Academy Juniors team, as well as the 2019 SuperCupNI Globe Cup Championship in Northern Ireland with NC Elite. Frame was first invited to train with North Carolina FC in 2019 as a U17 Academy Player. He has since continued to develop into a standout player, as he was recently named to the ECNL First Team All-Conference for his performance with the U19 NCFC Academy Team.

“This is an exciting moment for Cole and for North Carolina FC,” Head Coach John Bradford said. “He has shown through this season that he possesses the ability to play at the professional level and we feel he has the potential to continue to develop into a higher-level caliber player.  Cole is ambitious and dedicated to his growth and we’re thrilled to help him in his journey, while improving the winning mentality of our club. Since joining the club at seven years old, Cole represents our club’s full player pathway and multiple levels of player development opportunities at its best.  This is another milestone example of our club’s transition to supporting and investing in young players and their futures.”

“Cole is a very talented player that has grown up in our club,” President and GM Curt Johnson said. “He has seized the opportunity of playing in the professional environment, scored goals, committed himself to improving daily, and earned this contract. In addition to Nick Holliday’s signing, this is another tangible example of investment in our ambitious young players. We are thrilled for Cole and can’t wait to see him grow as a person and player.”

In addition to supporting his professional playing career, North Carolina FC has also made a financial investment in future education support for Frame, who is currently enrolled in on-line college courses through Wake Tech for this fall.