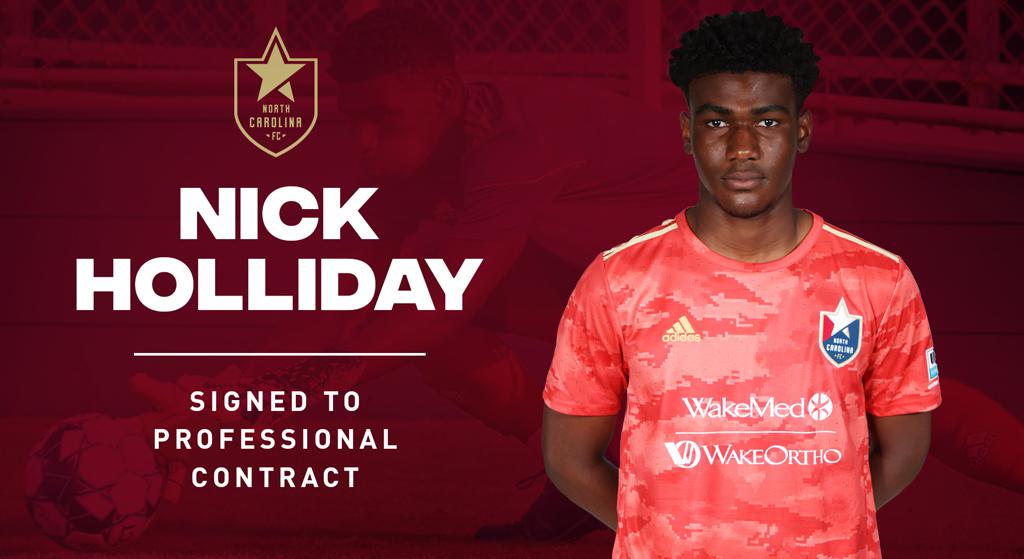 Cary, NC – NCFC Academy product, Nicholas Holliday, has signed a professional contract with North Carolina FC at 15-years-old, the club announced today. The deal is pending league and federation approval. The signing of Holliday is another significant step as North Carolina FC continues to focus on developing young talent and providing players the opportunity to play and succeed at the highest level.

Earlier this season, 15-year-old Holliday made history as the youngest goalkeeper to start in a USL Championship or League One match, as he made his professional debut on June 20 against the Chattanooga Red Wolves. Holliday would go on to face 37 shots throughout the match — a USL League One record — fourteen of which were on target, and ten of those were saves. With ten saves made in a single match, the Chapel Hill native is tied for the third-most saves made in a single match in USL League One history and is currently the youngest goalkeeper to start a professional USL match.

“I am both thrilled and grateful to sign my first professional contract with NCFC,” Nicholas Holliday said. “Over the last several years NCFC has encouraged me through challenging competition, outstanding coaching, and a commitment to maximizing my individual development. Thank you to the multiple teams that presented me with MLS opportunities, however I know I am at the ideal place with the right people to advance my career. NCFC shares my goal of becoming a youth national team goalkeeper, as well as preparing me to play overseas. This is my home and I am excited to continue my career here as a pro.”

In the aftermath of his debut, Holliday earned the nod for League One Fans’ Choice Save of the Week in Week Eleven of the season and won the award for a second time in Week Eighteen for his performance against the New England Revolution II. The academy product has clocked 180 minutes of playing time and two starts with the pro team.

“I am ecstatic for Nicholas to be signing his first professional contract and so pleased it’s with us here at North Carolina FC,” Head Coach John Bradford said. “Nicholas is certainly a talented goalkeeper, but what’s more impressive is his maturity and drive to develop and achieve the plans he has laid out for himself. For Nicholas at North Carolina FC, we will take a long-term approach to his development, blending our professional environment and opportunities abroad, to help progress and prepare him for the next phases of his career.”

Holliday first joined the club as an NCFC Youth Academy player in August of 2018, where he was immediately recognized as a bright young talent, with a skillset well beyond his age. Each season with the youth club, he participated with his age group, as well as those 1-2 years older. He first played with the U13 and U14 NCFC South Academy Teams at 12 years old and then continued through the NCFC Youth Academy system, playing for the U15 and U17 teams throughout the 2019-2020 season. Holliday officially signed as a North Carolina FC Academy Contract Player in 2020 and 2021, while still making appearances for the U16, U17 and U19 NCFC Youth Academy teams, and the USL-2 North Carolina FC U23 side. As a result of his dominant performances with the older age groups, Holliday was recently named to the 2020-2021 ECNL Boys All-Conference 1st Team for the Mid-Atlantic Division.

“This is a huge moment for our club and for youth professional development at North Carolina FC,” North Carolina Football Club President and GM Curt Johnson said. “Nicholas Holliday’s signing represents the commitment, investment, and intent our club has for top young players in the United States who dream of progressing their professional careers here and beyond. This signing is just the beginning as we will continue to invest in young talented players.”

In addition to supporting his professional playing career, North Carolina FC has also made a financial investment in future education support for Holliday.