Catching Up with Keith Savage 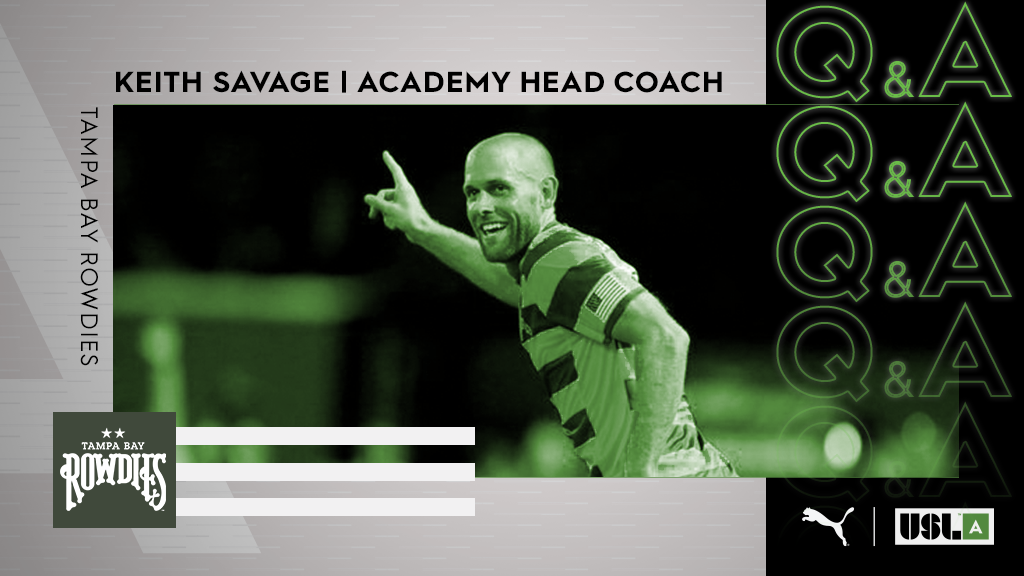 Keith Savage was a player for the Tampa Bay Rowdies from 2011-2017 and is considered a club legend. After four years of working within youth development in Florida, Savage has rejoined the Rowdies to become the USL Academy head coach. USL Academy sat down with Savage to discuss current and future plans for the growing team.

Academy (A): Could you tell me a little bit about your journey as a soccer player from college to pro?

Keith Savage (K): I had an amazing opportunity to play Division Two soccer in my hometown. I didn't necessarily expect to go pro, but because my team was so successful, I had some opportunities to try out with some professional teams and got invited to the MLS combine. I was drafted by Chivas USA and spent a year with them and then I went to Portland Timbers for two years, in hopes to get more playing experience. That was when they already had the bid for MLS. So this was when they were in the USL. I played 30 games one year and the next year, I had an injury. I was on the bubble to make the MLS roster and didn't, but there was an opportunity in Tampa and I was a Florida boy, so I was really excited about it. I was with the Rowdies for seven years. It was an amazing, amazing career.

A: What was it like playing in USL League Two (then PDL)?

K: I played for Central Florida Craze, and I loved it. It was my first look at higher level soccer. It was the first time I realized that I could play with anybody because there was a mixture of college players and former pros. I went in and I had success and it built my confidence. It definitely made me a better player, playing with higher level players all throughout the summer. That platform is what got me more exposure to get to sign a professional contract.

A: You're a Florida native and you went to school in Florida. You grew up in Florida. When the Rowdies came calling in 2011, was it an opportunity you just couldn't pass up?

K: I had an option. My coaches (at Portland) were very supportive, Gavin Wilkinson and Amos McGee. They really liked me, but they were not going to be MLS coaches, so it ultimately wasn't their decision. So they were extremely helpful in getting me to the next club. They told me I could go play in Europe, and they thought that I was well suited for a country like Belgium, and I was deciding whether to do that. They knew the potential in Tampa and they actually called the coaches and helped me sign that contract which was really cool. Honestly, I represented myself in Tampa. It was a startup. We had cold tubs in trash cans, the locker room was a trailer, and we had this horrible training facility. But within two years, we won a championship. It was really cool, a bunch of blue collar guys that worked really hard. To see it grow from 2011, to where it is now, is incredible. 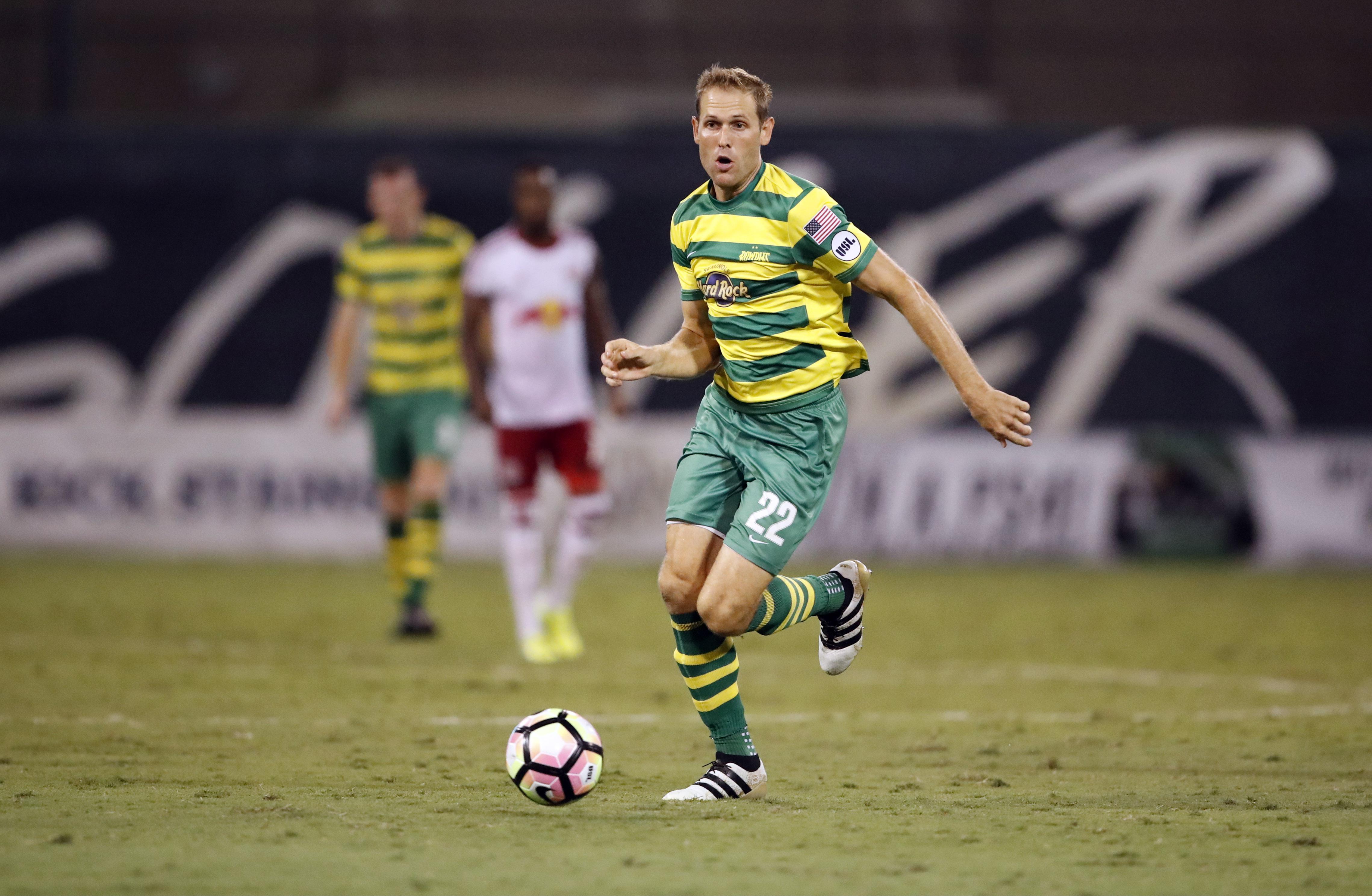 A: Have you been involved with the Rowdies since hanging up the boots?

K: I've remained close with the Rowdies since I remained in the Tampa Bay area after playing. When we started Savage Soccer, we immediately partnered with the Rowdies. The Rowdies have been supportive of my post-career. They have been looking for opportunities to keep me involved in some way but there hasn't been a right fit. But because USL Academy is starting out in the summertime, it works out great with my current career in order to jump right back in. I love being around the stadium. I love going around and seeing the local academies training and seeing how great a job they're doing. There are former Rowdies coaching those teams in the area. The Rowdies family is a tight knit community, even though it's spread out to other academies. They're all excited. The Rowdies are going to have an opportunity for the local player to play for free in front of the local head coaches. Neil Collins is the type of guy that is not scared to sign a young kid and play them, he's already shown that. The opportunity for the players is really exciting and I love that I get to go in there and be a part of that.

A: What does it mean to you to come back to the Rowdies as a coach for the academy?

A: What are the Rowdies currently doing at the academy level?

K: We're going to have a six-game season that is going to be learning what the USL Academy is about. These players all play for full time academies in the area and many of those coaches are former Rowdies as well. And those that run the organizations are on board and love what Neil's doing, so they're going to share players. Even though they've been training all year with their academies, these players are going to come in and play, because it's another opportunity to play in front of professional coaches and see what it's like to be a Rowdy. This is an opportunity for them to be seen. When they're in need of players for training or for US Open Cup matches, Neil will call our guys in or sign them to USL Academy contracts, which is really just another opportunity for players. I think in the future, it will grow, but for the time being, we're going to complement the local academies and not necessarily be a full time Academy until two or three years from now.

A: Is there a flow in staff between the academy and the senior team? 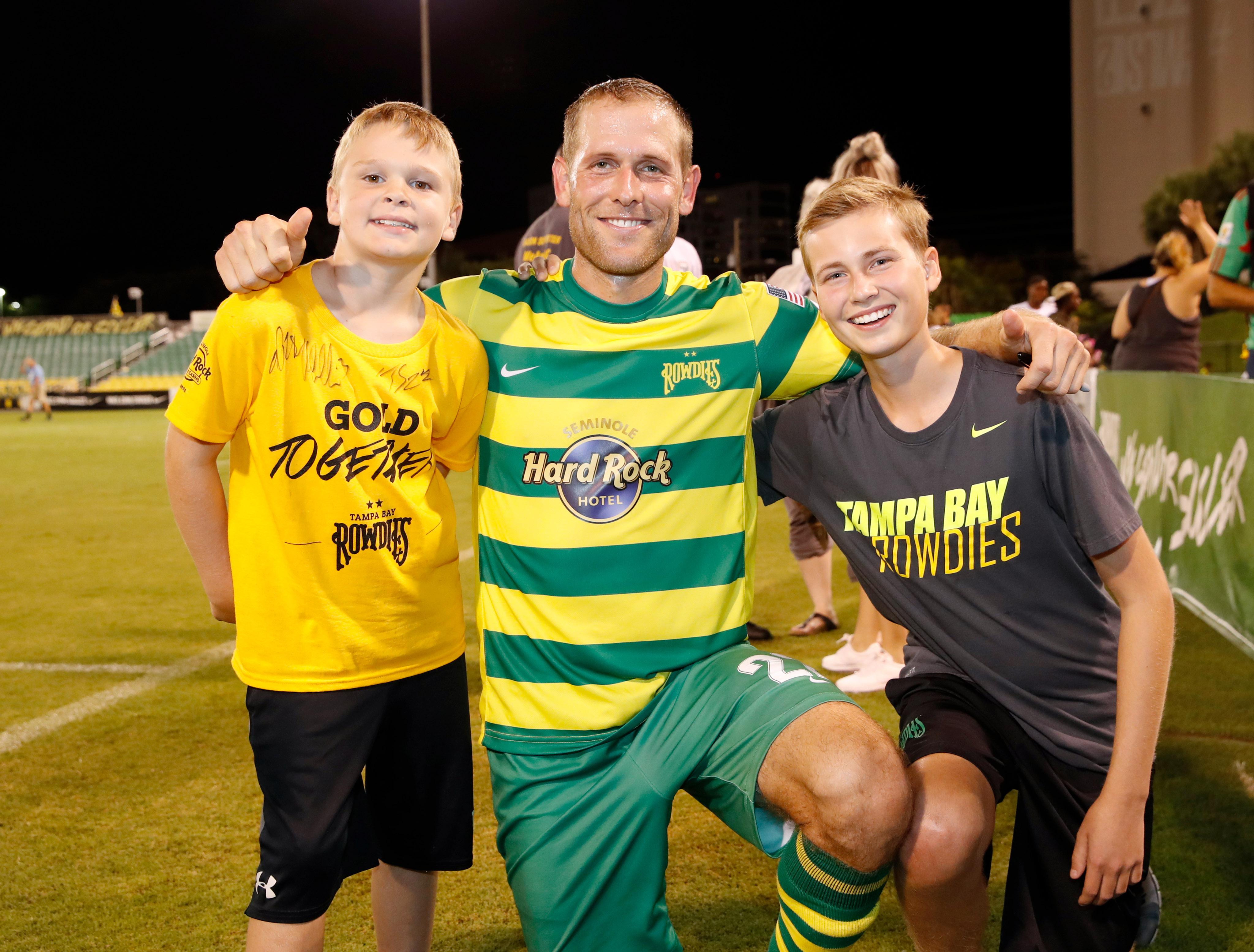 A:  What is your goal with the Rowdies in regards to the academy?

K: I think the reason I'm gonna be involved is because it's a great opportunity for the local player. I have always believed that local players should play for the local professional soccer team. The academies in the area do a fantastic job but they can't provide a free platform for every player. The Rowdies should be the aspiration for every local player. Even though they're getting great training and they're in great environments at their own clubs, they will have an opportunity to go be a part of the local pro team for free with an opportunity to sign contracts. That's why I want to be involved. It keeps me close to the game with the highest level players in our area, which I think is really exciting for me as a coach. I'm just excited to give them another voice, encourage them and hopefully just connect with players and help them get to the goals that they want.

A: How do you see USL Academy helping grow American soccer?

K: This is going to be another opportunity. I love that it's connected to the local pro teams. Hopefully, all of USL will build these academies so that ultimately, they're traveling around and playing against each other so that they're simulating a professional environment. They're fed the same way, they train the same way, they travel the same way. I think that's the ultimate end goal. Hopefully, it's a free opportunity for the players. That's a big ask for ownership throughout the USL, but I think they have huge aspirations and it's a good thing. It's exciting. There's plenty of avenues, including college soccer, multiple divisions, and this will just be another opportunity for the local player.

A: What advice do you have for a current player who is thinking about becoming a coach?

K: If you have a passion for it, then get your licenses while you're playing. You have an opportunity for your local professional team to stay involved. I think the guys in our area that are coaching for academies would have loved to jump right at coaching for the Tampa Bay Rowdies. But it didn't exist then, and now it does. I've seen the current players that want to coach and they're really excited about it. You need to have a passion for youth and a passion for the game. Seek out opportunities, because at the end of your career, it is a difficult transition. But to know you're going to coach, you have the experience in the background from when you were playing. It's a great thing and hopefully provides a career after your playing career.