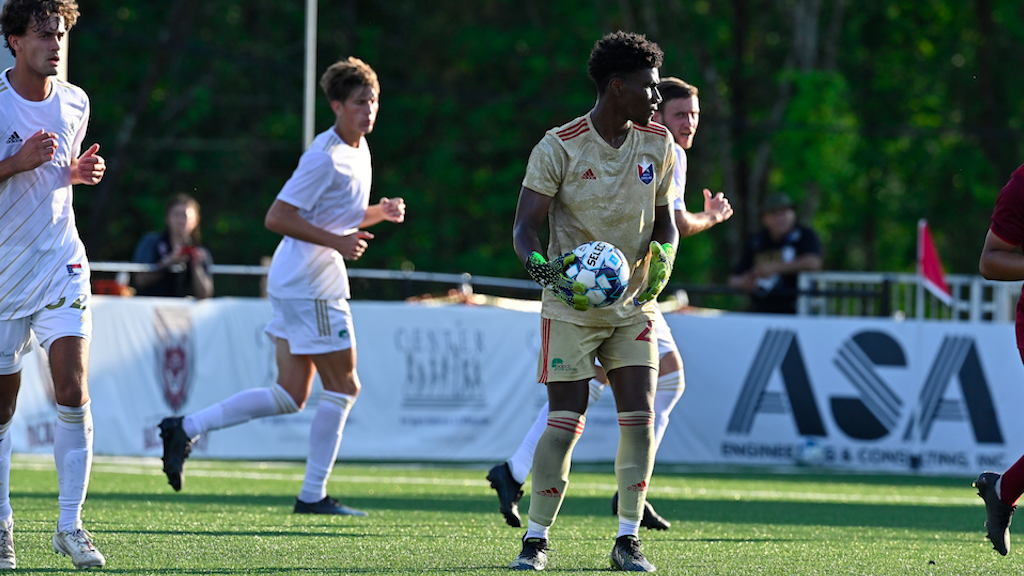 Holliday made 10 saves on his professional debut, tied for third-most in a match in League One history / Photo courtesy Chattanooga Red Wolves SC

Plenty of top soccer players have progressed through the USL ranks in their young careers. Within the last few years alone, players like Alphonso Davies, Tyler Adams, and Brenden Aaronson developed in the USL Championship, while young League One standout Bryan Reynolds is now in Serie A, and Justin Che spent time on loan in Bayern Munich’s system and was called up to the senior U.S. Men’s National Team squad.

Last Sunday, North Carolina FC’s 15-year-old goalkeeper Nicholas Holliday added his name to the list of precocious prospects to make their professional debuts in the USL, and he did so in some style. Up against one of League One’s most potent attacking teams in Chattanooga Red Wolves SC, Holliday was spectacular.

“Starting Nicholas Holliday is a monumental moment for North Carolina FC and our club vision and direction, but even more so for this talented young man,” said NCFC Head Coach John Bradford. “We have looked forward to the moment that Nicholas would get the opportunity to start his first professional game and I was so proud to see him do so well.”

When Holliday saw his name among the starters, it was quite a moment for the NCFC Academy product.

“When I found out [I was starting], I was a little emotional,” Holliday said. “It’s something I’ve dreamed of for a very long time, and a lot of people in their lives don’t get to live out their dreams, so I was very happy and excited.”

“It was like a dream come true,” said Holliday of the occasion. “All the guys were around me and supporting me. Of course it didn’t end the way we wanted it to, but I was very happy and blessed to have that experience. I learned a lot from it.”

You wouldn’t have been able to tell from watching his performance, but Holliday did have some jitters from playing with and against older and more experienced peers. As is often the case though, his nerves settled down after that all-important first touch of the ball.

“Once I made my first save, it felt like just another game,” said Holliday. “I finally felt composed and like, ‘You got this now, they’re ready for you.’ I was calm after that first save.”

Holliday has a bright future in front of him. His debut is the latest among top young goalkeeping prospects to occur in the USL’s professional divisions. Among his predecessors are recent U.S. Men’s National Team call-up David Ochoa - who made his debut for Real Monarchs SLC in 2018 before leading the side to a USL Championship Title the following year - or Romero, who has earned prior call-ups to El Salvador’s national team program while remaining available for selection for the United States as well.

A bright future also lies ahead for many of the young players coming through the NCFC ranks. The club has built one of the country’s most effective youth development systems: in the last six years, the program has produced 33 players called into U.S. youth national team camps, and more than 100 players committed to play college soccer, as well as those now competing at the senior international level like former NCFC player Dre Fortune with Trinidad & Tobago.

This season, the club signed 15 of its Academy players to USL Academy contracts with the First Team, allowing them to gain valuable experience competing against professionals. Nine NCFC Academy products have made their professional debuts so far in 2021, including Holliday and Cole Frame, who on Sunday became the first NCFC Academy player to score in a pro game for the club.

It’s a sign of the club’s continued commitment to providing a platform for young players in its area. With teams in the USL Academy League, USL League Two, and USL League One, NCFC has the ability to get each of its individual boys players minutes at the competitive level that benefits them at the right time. Though just 15, Holliday is a perfect example of a young player ready to take on the challenge of playing at the pro level for the first time, and he had the opportunity to do so thanks to the club’s structure and coaching staff.

“Nicholas has worked so hard to get here and has such a bright path ahead,” said Bradford. “I am so proud of Nicholas and his family’s sacrifices to get him here, but also the countless hours that our staff has collectively put into his on and off field development.

“To see Nicholas, and others, come into the professional environment and excel continues to validate the effectiveness of our club’s youth development system, as well as show the true opportunity our club provides to those players that can earn these opportunities.”