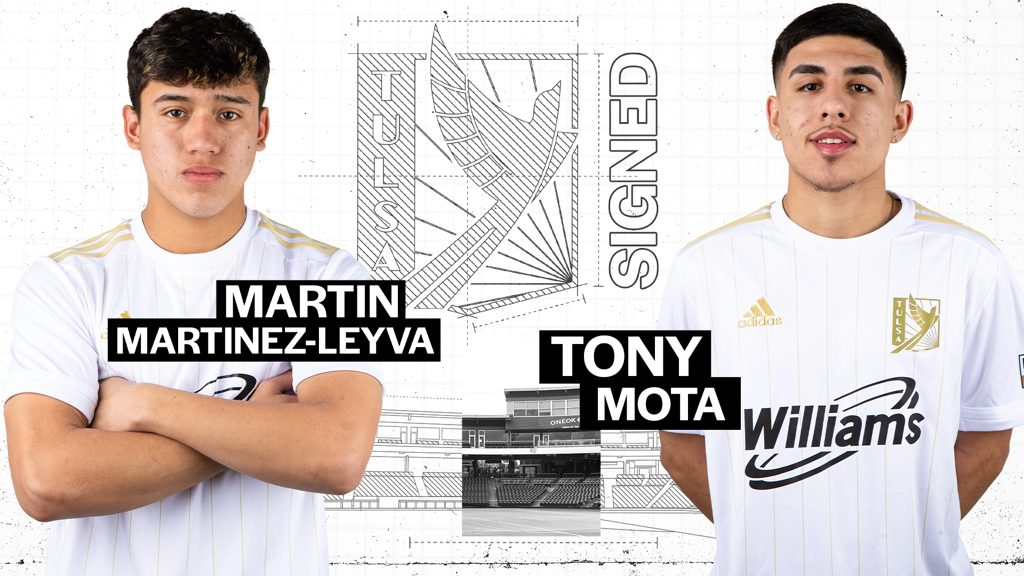 TULSA, Okla. – FC Tulsa has signed local youth players Martin Martinez-Leyva and Tony Mota to Academy Contracts for the 2021 USL Championship season. Martinez-Leyva, a forward, and Mota, a midfielder, both come to FC Tulsa having previously played for Tulsa Soccer Club, a local youth club with a history of national success.

“Tony and Martin are both players that I’m familiar with from long ago in my time in youth soccer,” said FC Tulsa Head Coach Michael Nsien. “They’re two players who have always excelled, they’re always driven, trying to improve. I think the next step for them is to be around players at that higher level, the professional level, so they can continue their development. What I’ve explained to them is that they’ve got an opportunity, what they do with it is up to them.”

Martinez-Leyva, 17, has been one of the best 04’s in the country. After winning the 2011 SuperCopa with Tulsa youth club Blitz United, Martinez-Leyva moved to TSC in 2012. His list of accolades with TSC is long, including two ECNL National Championships in 2018 and 2019, was named the Texas Conference Player of the Year in 2018 and an XI National selection in 2017/18.

In addition to his play for TSC, Martinez-Leyva has spent the last three seasons playing high school soccer for Bixby High School.

“I thank God for everything, and my family for being so supportive in my journey,” said Martinez-Leyva. “This opportunity is a dream come true. I’m very excited to work hard, grow as a player and do whatever I can to help achieve our team goals this season with FC Tulsa.”

Mota, 18, was born and raised in Green Country and joined TSC in 2010, winning the Texas Conference championship in 2018. He played just one year of high school soccer at Claremore High School as a freshman, but made it count. In his lone high school season, Mota racked up 14 goals, was nominated for All-District, and was the team’s Offensive Player of the Year, leading the team to the State playoffs.

“Signing my first professional Academy Contract means the world to me,” said Mota. “It brings me a step closer to fulfilling a dream I’ve had since I was a little kid. I’m beyond blessed to be given the opportunity to start my journey in my hometown. I wouldn’t be in the position I am today without the support of my family. I’m ready to give Tulsa my all.”

The pair of Academy signees join midfielder Ciaran Winters as local standout youth players that FC Tulsa has identified and signed to Academy Contracts over the last two seasons. After spending a year as an Academy player, Winters signed a Professional Contract this offseason to become the first native Tulsan to complete the Pathway to Pro.