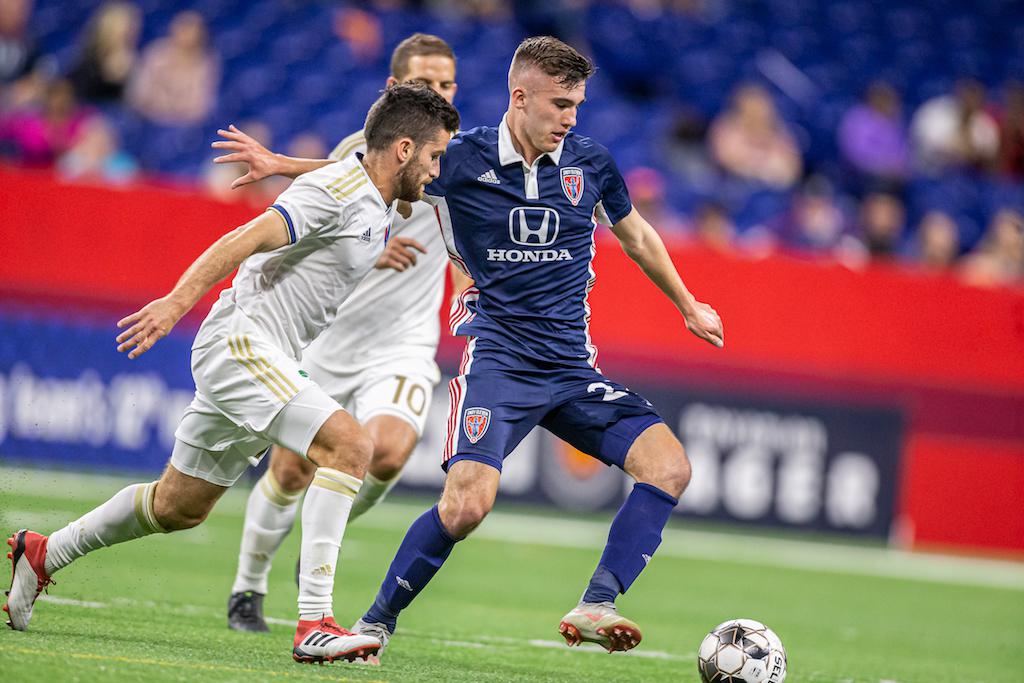 On August 25, Indy Eleven made club history when it signed Josh Penn to his first professional contract. A former USL Academy signing and Indiana University standout, Penn became the first player to compete for the Boys in Blue as an Academy signing, then go on to sign a professional deal with the club.

“It’s a really cool opportunity and I am proud I can be the first to take that step. The players here made it easy as a young kid to feel comfortable and to be able to come back to that gives me a great feeling,” said Penn. “I hope that other young kids see the path I’m taking and can feel confident that this is another different professional path that can inspire them to put the work in and follow in my footsteps.”

The native of Naperville, Ill. impressed during his initial stint with Indy, making five appearances in the 2019 season before heading to Indiana University to begin his college career last fall. After earning All-Big Ten Second Team and All-Freshman Team honors last fall, he made the decision to leave IU and return to the Eleven as a full-time professional because the opportunity was too good to pass up.

“Deciding to leave IU wasn’t the easiest decision in the world, but I felt like it was what was needed at the time,” said Penn. “IU was an amazing place and I’m so happy I got to spend time there, but with all that’s going on, the risk of staying felt too large to pass up on Indy Eleven.

“Indy Eleven is a club I’m very familiar with and a club that I am confident can help me continue to grow as a player. The culture created by [Head Coach] Martin [Rennie] and the players here is fantastic and something I am proud to now officially be a part of.”

A former star player for U.S. Soccer Development Academy program Chicago Sockers FC, Penn has also competed with the U.S. U-19 Men’s National Team and trained overseas with Danish Superliga side Brøndby. But Penn says his experience playing with and against professionals as an Academy signing was especially valuable.

“Being able to come to Indy Eleven my senior year was a really important step for me,” said Penn. “I think it was important to be more challenged at that point in my career, and coming to Indy definitely challenged me and helped develop me. The guys took a lot of their own time to help me improve in various areas of my game and I couldn’t be more thankful for what was put in during that time to help me grow.”

Penn impressed Indy Eleven Head Coach Martin Rennie when he was with the club as its youngest Academy signing (a record that has since been broken), and Rennie kept tabs on him throughout his stellar freshman season at Indiana. The choice to offer Penn a professional contract was a simple one.

“Josh is an exciting young player with a lot of potential,” said Rennie. “He has excellent speed and finishing ability as well as very strong 1-v-1 skills. Josh can play in a number of attacking positions and we think this versatility will make him an excellent signing for Indy Eleven.”

Aside from Penn inking his first professional contract, the recent announcement of Indy Eleven’s new youth network is more reason for excitement about the club’s growing youth development infrastructure.

The hope for Rennie and others at the club is that initiatives like these – along with USL Academy League and Cup events set to begin in 2021 – will help create a pathway for local youth players to reach their state’s Senior Team, much like Penn did.

“Indy Eleven has transformed as a soccer club over the last few years,” said Rennie. “Not only are we signing top young academy players to our roster, we are also following a philosophy and style that we can build on year after year. The club has a clear identity and this process is followed with the first team right through to our youth development partners.

“Our recent youth partnerships show that Indy Eleven has built a foundation and an infrastructure that transforms the potential of the club.”

To learn more about the exciting initiatives in youth development happening as a result of the fast-growing USL Academy platform, visit usl-academy.com/about or search #USLAcademy on social media.