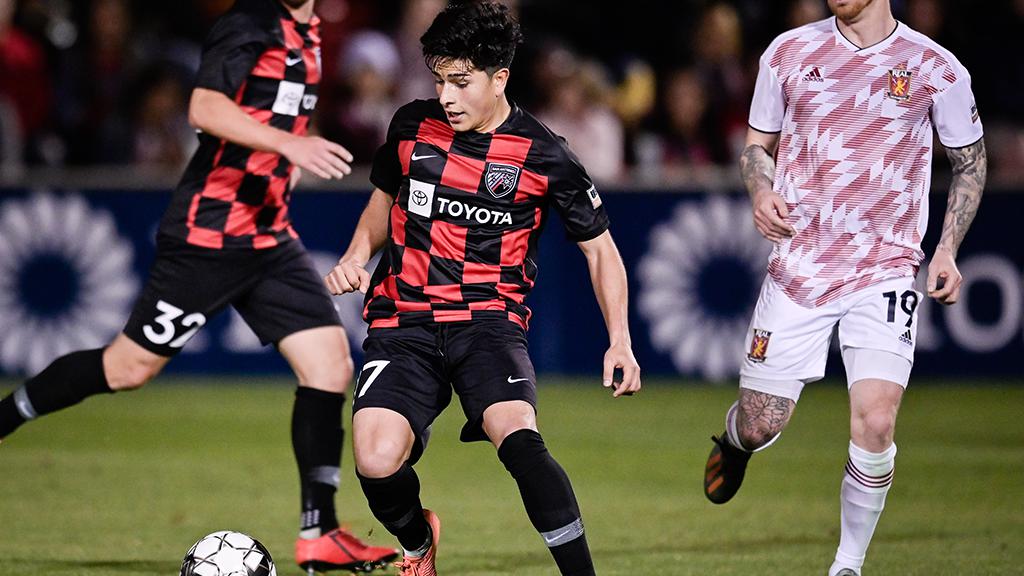 An Academy standout, San Antonio FC's Jose Gallegos signed his first professional contract with the club this offseason, and is set to be a key figure in its 2020 Championship campaign. | Photo courtesy Darren Abate / San Antonio FC

SAN ANTONIO, Texas - In recent years, the San Antonio FC Pro Academy has become one of the top youth soccer academies in the country, establishing an excellent track record of giving young players opportunities to compete against professionals with the club’s First Team in the USL Championship.

Yet even among a steady flow of talented prospects, 18-year-old forward Jose Gallegos stands out.

“I first saw Jose when he was 11 years old,” said SAFC Pro Academy Director Nick Evans. “He always wanted to be on the front foot and take players on. He was comfortable in possession. He’s a little dribbler, and those are the types of players we admire here.”

While playing with local youth club Classic Elite, as well as for his high school team at Central Catholic High School (which he led to four consecutive TAPPS state titles), Gallegos joined SAFC’s Elite Training Program. By age 16, he had begun training with SAFC’s First Team.

It was a moment that spurred on his development.

“The [SAFC Pro] Academy has been very important,” said Gallegos. “That’s how I got the opportunity to play with the first team. They would prepare us in training, and we would be able to see what it is like and what it takes to get to the pro team on a daily basis.”

In April 2019, the club offered Gallegos a USL Academy contract with the first team, joining a squad that included current and former internationals, and numerous players with Major League Soccer experience. Despite that, he made a big enough impression to record 14 appearances in the Championship last season, recording a goal, an assist and 11 chances created in 600 minutes played.

And with a full year under his belt, the past offseason saw Gallegos take another big step forward. His performances in preseason were eye-catching beyond his three goals in three preseason matches, and after signing professionally with the club late in February the spotlight was growing.

I know it's only preseason, but San Antonio's Jose Gallegos could be a serious option for the US-U20s.

The 18 year old has 3 goals in 3 games, and was fantastic against a first choice FC Dallas defense last night. Someone to watch out for this year.

there should be a lot of this from Jose Gallegos this season pic.twitter.com/7i75Y15Uxr

That’s unlikely to change now, as the Championship returns to play on July 11, with SAFC Head Coach Alen Marcina full of praise for what Gallegos brings to the table.

“Jose made that decision easy for us,” said Marcina of signing Gallegos to a professional deal. “His performance throughout preseason was great -- he was our leading scorer and he earned that opportunity. It’s a testament to who he is as a person and his character. He embodies the SAFC culture. So for us, it was a no brainer to offer him a full-time contract.”

While Gallegos did not compete at the first-ever USL Academy regional event last October, which SAFC hosted at Toyota Stadium and STAR Soccer Complex, he’s a great example of the promising pipelines being created for young players at SAFC and other clubs across the USL landscape.

Gallegos never played in a U.S. Soccer Development Academy environment, but was able to flourish as a young professional thanks to the effectiveness of the player identification and integration strategies used by SAFC’s coaching staff.

“A consistency over time in his performance in the training environment,” said Evans when asked what makes Gallegos special. “Also, his willingness to learn, and the potential of what he is as a player and what we think he can do for us as an organization. He’s a San Antonio boy and we like rewarding players who come through the soccer education system here in San Antonio.”

With the launch of the USL Academy League set for spring 2021, there will soon be more opportunities than ever for young talent like Gallegos to play against elite competition, and for clubs like San Antonio to find and develop future productive players. Gallegos himself has plenty of ambition in his soccer career, but for now, the young forward remains focused on helping SAFC win games.

“Every kid’s dream is to go to Europe someday, and obviously that’s my dream as well,” said Gallegos. “But right now, my focus is on SAFC, and I feel they are preparing me for when that opportunity comes.”