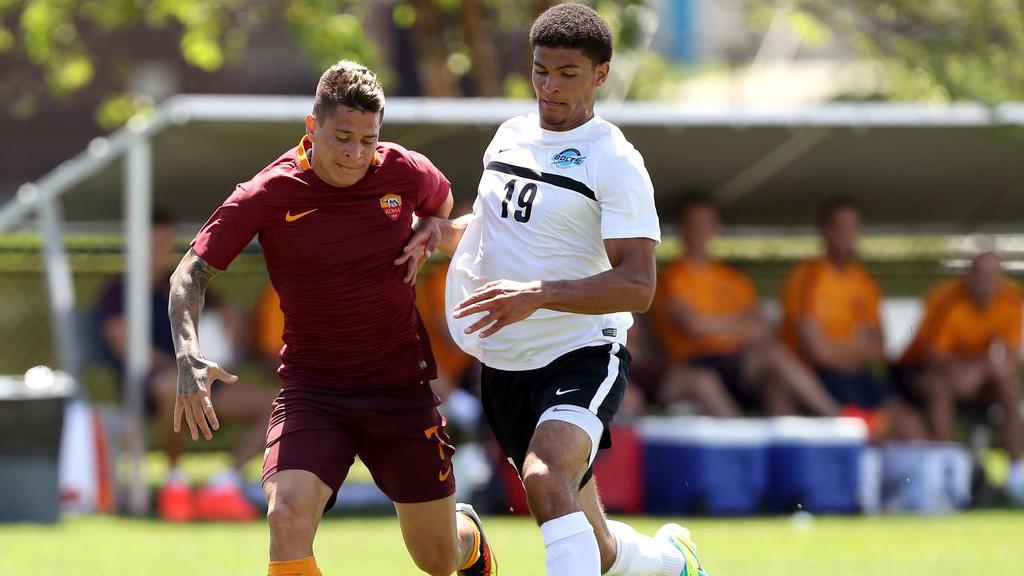 Former Boston Bolts defender Miles Robinson - who in 2019 made his debut for the U.S. Men's National team - competed for the League Two side in a friendly against AS Roma in 2016. Photo by Mike Lawrie

Miles Robinson is one of the most exciting American center backs in Major League Soccer. Drafted with the second overall pick in the 2017 MLS SuperDraft, the 6-foot-2 defender quickly impressed in USL Championship loan spells with both Charleston Battery and Atlanta United 2.

In 2019, the 22-year-old broke through to the Atlanta United's MLS side, becoming a mainstay for one of Major League Soccer’s top clubs. Robinson started 33 of 34 regular season matches for the Five Stripes, and was named to the 2019 MLS Best XI. His club performances earned him his first two appearances with the U.S. Men’s National Team.

But before Robinson’s rise, the Massachusetts native spent much of his youth career within the Boston Bolts organization. When the club fielded a side in USL League Two for the first time in 2016, Robinson had the chance to develop against some of the country’s top young players.

“We joined League Two to expose our players to the next level,” said Boston Bolts CEO Brian Ainscough. “Most of the team is made up of former Bolts youth players who are now in college, or our current top U19 players. Our academy players often get the opportunity to train with the League Two squad.”

The addition of a League Two side to the top of the club’s development period helped its talented players bridge the gap between the youth and professional levels. Players like Robinson, recent United States U-20 international Justin Rennicks, and Mayele Malango all benefited from competing with the Bolts in League Two.

Rennicks played for the Bolts in the 2017 and 2018 League Two seasons, and he used the platform to propel himself to involvement with the U.S. youth national team program and a Homegrown Player contract with the New England Revolution. The 20-year-old then made his first big splash in the national consciousness at last year's FIFA U-20 World Cup in Poland, scoring a memorable game-winner against France to send the United States into the Quarterfinals of the tournament for a third successive edition of the tournament.

Justin Rennicks cleans up the rebound and gives the USA a 3-2 lead. The Baby Yanks are minutes away from the U-20 World Cup quarterfinals! pic.twitter.com/s0Ng4aQmLT

Malango, meanwhile, is the latest prospect to advance through the Bolts system. Part of the Bolts' League Two squad last season, he caught the eye of the Revolution technical staff in a scrimmage between the Bolts and the Revolution's U23 team, earning a professional contract with the newly-formed New England Revolution II in USL League One.

Players who come through the Bolts system also have the chance to learn from those who have been where they want to go, a best practice for any youth soccer program. Former New England Revolution players Andy Dorman and Shalrie Joseph, who between them made nearly 400 appearances for the Revs, have both been members of Bolts coaching staff.

Just as joining League Two was vital in expanding the Bolts development pathway, the new USL Academy competition is sure to have a similar effect. The platform represents an opportunity for the Bolts younger players to test themselves against top competition from clubs at every USL level, better preparing them to make the jump to the club’s League Two side.

“We as a club are very excited to participate in USL Academy play, and we want to support the platform in any way we can,” said Ainscough. “Our players and coaches are thrilled to be a part of the event.”

The Bolts first USL Academy team will feature plenty of talented prospects looking to follow in the footsteps of Robinson, Rennicks, Malango, and others. Connor Gibson, a highly-technical and intelligent central midfielder, is one of the club’s top players, along with imposing center back Henri Richter and dangerous winger Triston Beauvois.

Look for that trio to have an impact at the USL Academy Eastern Conference Event in February. To learn more about the event or the USL Academy platform, visit usl-academy.com or search #USLAcademy on Twitter.